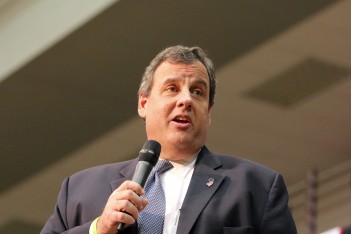 New Jersey Gov. Chris Christie filled in as a co-host on WFAN’s Boomer and Carton Show on Friday and ripped the National Basketball Association (NBA) for moving its 2017 All-Star Game from North Carolina. The decision to move the game was reportedly made in response to the uproar surrounding a law that overturned local city ordinances that provided LGTBQ anti-discrimination protections. The law also requires individuals to use bathrooms corresponding to their assigned sex at birth.

“Are they going to evaluate every law in every state or is it just a certain law?” Christie asked, according to NJ.com.

“I know what it is,” Christie added. He then proceeded to tell the audience exactly what he thought was going on, in his usual blunt manner.

“It’s grandstanding by the NBA, and that’s what they do.”

The remainder of the show reportedly steered clear of legal matters and politics. However, one caller did ask Christie to weigh in on reports that he was heckled over the weekend during an appearance at the PGA Championship.

Christie told the caller the heckling and shouting no longer bothers him.

“I know this is, like, a stunning admission … it doesn’t bother me if you make fun that I weigh a few more pounds than I should,” Christie said, according to Philly.com

“’Open the bridge’ – I haven’t heard that one before, right?” Christie said, referring to the so-called Bridgegate scandal.

Earlier this week, Christie called for state probe of two Democratic lawmakers who chaired a committee that investigated Bridgegate, alleging they may have used state resources to fund political attacks.

Have a tip we should know? [email protected]m