Will Donald Trump Be Impeached? Here’s How It Would Happen. 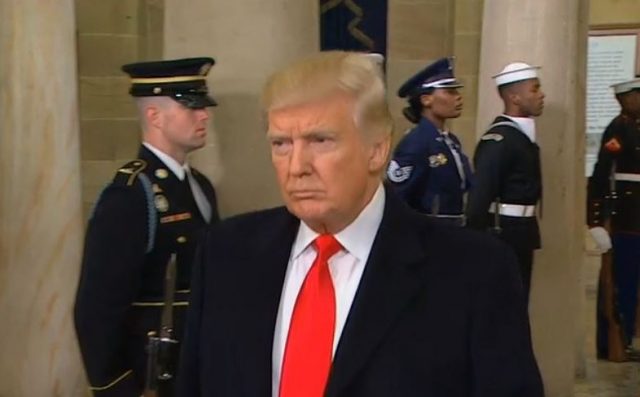 Now that Donald Trump has officially been sworn in as the 45th President of the United States, there are already calls underway for him to be impeached.

ImpeachDonaldTrumpNow.org, a website aimed at removing Trump from the presidency, was launched immediately after Trump was sworn in. “The nation is now witnessing a massive corruption of the presidency, far worse than Watergate,” the website, which was created by two liberal groups, claims. Many have predicted that Trump won’t last the full four years and are wondering not if but when Donald Trump will be impeached. Now, this all might be a bunch of wishful thinking by Trump’s opponents. However, given the deep divide in Washington D.C. and throughout the country, the possibility of an impeachment is worthy of a closer examination. So let’s break down what would have to happen on the legal front.

First, What Does the Constitution Say?

Under Article II, Section 4 of the U.S. Constitution, a President can be impeached upon the “Conviction of, Treason, Bribery, or other High crimes and Misdemeanors.”

According to the Constitution, the House must bring formal charges against the federal official, and then the procedure moves to the Senate, which acts as the trier of fact. They ultimately make the decision on whether to remove Trump which requires a two-thirds majority of the Senate.

As the Constitution states, impeachment is reserved for a “conviction of, Treason, Bribery, or other High Crimes and Misdemeanors.” That means Trump can’t be impeached just because all of a sudden Republicans turn against him or because they think he is “unfit” for office. In fact, one framer wanted to add the word “maladministration” to the grounds for impeachment in the Constitution. However, James Madison objected saying that “so vague a term will be equivalent to a tenure during pleasure of the Senate.”

Only two Presidents, Andrew Johnson (1868) and Bill Clinton (1998), have been impeached (both were not removed by the Senate). Nixon resigned in 1974 before facing impeachment proceedings. Clinton was charged with lying under oath to a federal grand jury and obstructing justice. So as you can see, impeachments are quite rare from a historical perspective, and for the procedure to succeed the charges against Trump would have to be pretty serious.

So, What Could Trump be Impeached For?

Some constitutional experts contend that Trump’s business entanglements may amount to a violation of the U.S. Constitution’s Emoluments clause, which prohibits federal officials from receiving gifts from foreign states without the consent of Congress. “No prior president has come anywhere close to Mr. Trump in the scale of possible violations,” a recent article published by Constitutional experts for the Brookings Institute states. The experts are particularly concerned with Trump’s hotel in Washington D.C. where foreign dignitaries might feel pressured to stay.

During a press conference last week, Trump’s attorney said that in order to avoid any violation, the Trump Organization would donate all profits from foreign governments to the U.S. Department of Treasury. But, some experts don’t think that goes far enough. Harvard Law Professor Laurence Tribe told LawNewz.com that “the whole phony setup would make President Trump a living, walking, talking, tweeting violation of the Emoluments Clause each time banks or funds linked to foreign sovereigns are allowed to take steps that Trump will necessarily know are enriching the total value of his family’s mega-business.”

However, Michael Gerhardt, a University of North Carolina at Chapel Hill School of Law professor who testified in a hearing for President Bill Clinton’s impeachment told The New York Daily News that there would have to be an explicit quid pro quo — or bribery — for any of this to amount to an impeachable offense.

“There would have to be facts showing a quid pro quo,”  Gerhardt said.  “It would be like Watergate — ‘Follow the money.’ We’d have to be able to follow the money to Trump to know what extent he might be corrupted.”

Another possibility of an impeachable offense would play out similarly to what happened with Bill Clinton when he was sued by Paula Jones for sexual harassment while he was President. On Tuesday, former Apprentice contestant Summer Zervos filed a defamation lawsuit against Donald Trump claiming that he lied about touching her inappropriately. If she gets to the point, where her attorney, Gloria Allred, is allowed to depose the President, and he lies (and it’s provable), this too could be grounds for impeachment as he would be lying in sworn testimony.

Can Trump be Impeached for His Actions Prior to Taking Office?

That’s a tricky one. Most experts say that the impeachable offense must be related to Trump’s actions while in office. So, for example, if an FBI investigation were to show that Trump took bribes from Russia when he was running for president that might not count because it happened prior to him taking office. However, LawNewz.com’s Elura Nanos lays out what could be an exception:

There’s no statute that definitively lays out the founding fathers’ rules regarding impeachment timelines, and it’s not an issue that has come up enough times for a clear rule to have developed; the closest thing we have is a statement from the House Judiciary Committee from 1873.

At the time, the House was considering impeachment of Vice President Schuyler Colfax for having taken part in some shady railroad dealings. The Committee said that under the Constitution, impeachment “should only be applied to high crimes and misdemeanors committed while in office and which alone affect the officer in discharge of his duties as such, whatever may have been their effect upon him as a man, for impeachment touches the office only and qualifications for the office, and not the man himself.” So, at least at that time, impeachment was understood as a sort of employment remedy, done by public officials to public officials when they’ve committed professional wrongdoing.

However, there is a tiny little precedent for the concept of impeaching someone for wrongdoing that preceded the person’s federal service – and it’s much more recent than 1873.  That case involved the 2010 impeachment and conviction of District Court for the Eastern District of LouisianaJudge Thomas Porteous. Judge Porteous was removed from the bench after Congress concluded that he had been involved in corruption, committed perjury, accepted bribes from lawyers practicing in his court, and attempted to conceal his sordid past during the confirmation process. During those impeachment proceedings, the timing of Porteous’ wrongdoing never surfaced as any true obstacle.

Interestingly, in a Newsweek piece published in September, writer Kurt Eichenwald documents an exchange between Jeb Bush and Donald Trump where Bush insinuates that Trump offered him money to change his views on gambling.

“The one guy that had some special interests that I know of that tried to get me to change my views on something—that was generous and gave me money—was Donald Trump,” Bush said during a 2015 debate. “He wanted casino gambling in Florida.”

Trump interrupted “no I didn’t” and that was “false.” However, Eichenwald points to testimony from 2007 in which Trump testified under oath that he talked to Jeb Bush about changing his stance about gambling in Florida. Eichenwald concludes that Trump was either lying during the debate, or under oath.

“No question, these two stories must be investigated if there is ever a President Trump. In their impeachment of President Bill Clinton for lying under oath about an extramarital affair, Republicans established the standard that failing to tell the truth while testifying—even in the most understandable of circumstances—rises to the level of high crimes and misdemeanors. Surely, perjury for pecuniary purposes or to inflate one’s self-image cannot be ignored,” Eichenwald writes.

So, what happens next?

That is anyone’s guess. However, with Republicans in control of both the Senate and House, an impeachment seems unlikely. But you have to remember Trump’s favorability ratings are hovering at historically low levels. If they continue to take a nose dive, Republicans could very well turn against him (again). It wouldn’t be totally inconceivable, given that just a month before the election,  House Speaker Paul Ryan refused to defend or campaign for Donald Trump. This could get interesting.

Elura Nanos contributed for this report.