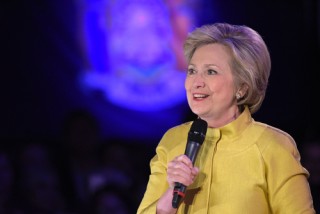 In the first three months of 2015, former Secretary of State Hillary Clinton earned $1.4 million for six speeches she gave to various audiences. The following month, she began her campaign for the Democratic Presidential nomination, dumping $278,821 into preliminary campaign expenses. Ethics advocates have questioned whether her speaking fees were basically a “pass through” of funds from special interest groups, according to Yahoo News.

Prior to formally announcing her candidacy, while she was making her speaking appearances, Clinton was already spending money on the race, with campaign manager Robert Mook and aide Huma Abedin campaigning as early as January 2015.

Anne Weismann, executive director of the watchdog group Campaign for Accountability to Yahoo, said that while candidates have plenty of leeway in spending on “testing the waters” before formally kicking off a campaign, one of Clinton’s speaking engagements could be problematic. A March 19, 2015 speech before the American Camp Association earned Clinton $260,000. That was more than 10 percent of the organization’s budget. Weismann said, “It’s hard to see how it fits with the mission of that organization to pay $260,000 for a speaker who is about to run for president.” One of the organizers of the event was Jay Jacobs, a prominent figure in the summer camp industry, the Nassau County Democratic Party chairman, and a Clinton Foundation donor, and a Clinton campaign fundraiser. Jacobs told Yahoo News that the hefty fee, larger than what Clinton received from Bank of America or Morgan Stanley, was the number given by the Harry Walker Agency that represents Clinton.

Jacobs claim there was nothing fishy about the speech, and that it had nothing to do with Clinton’s campaign. The talk, a 30-minute speech with a 30-minute question and answer period, was open to the public and press, unlike her closed-door Wall Street appearances. He said Clinton discussed her own camp experiences as well as her daughter Chelsea‘s. “Nobody — including me,” Jacobs said, “had any thought about the money going into her campaign.”

Yahoo reports that as of last month, Clinton has spent $560,983 on her own campaign, more than any other individual donor.