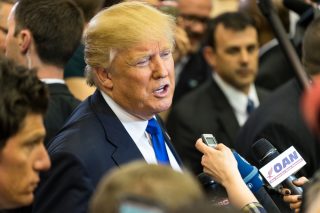 According to correspondent Drew Griffin, Trump lawyer Alan Garten said two projects were canceled in Rio de Janiero. A third building project in Azerbaijan has also been “separated” from the Trump Organization. Garten described the process as “housecleaning.”

Concerns about conflict-of-interest have followed him since before the November 8 election. He said he’d hand off management of his business empire to his children, but that fell short of actual divestment. Questions about his assets, including investments, abounded after the election: his financial tie to the Dakota Access Pipeline, possibly violating a lease agreement when he takes office, a debatable violation of the emoluments clause, and the possibility that he leaves himself open to impeachment.

Trump had announced a press conference for this week, in which he’d explain how he was “leaving” his businesses to become president. But that’s been postponed for an unspecified date in January.