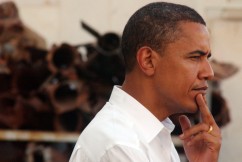 The U.S. Supreme Court temporarily halted President Obama’s ambitious plans to regulate carbon emissions on Tuesday. President Obama had instructed the EPA, an administrative agency, to promulgate new rules which seek to curb carbon dioxide emissions from power plants. The ruling is a major blow and setback to the Obama Administration’s strategy to combat climate change.

In a 5-4 vote, the Court accepted a request made by 27 states, in conjunction with various companies and business groups including a West Virginia coal producer and a Texas oil producer Texas, to temporarily stop the President’s Clean Power Plan. The order by the justices puts the regulations on a temporary hold while the legal challenge is litigated.

The Circuit Court of Appeals for the District of Columbia has yet to hear oral arguments and will evaluate arguments in hearings scheduled for June 2.