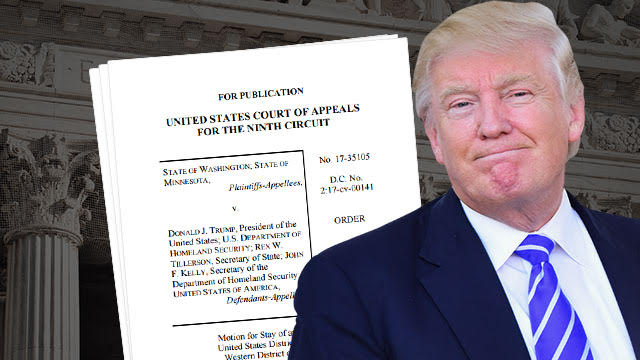 In a rare move, one of the judges on the Ninth Circuit of Appeals has made a request that a vote be taken as to whether the order issued by the three judges Thursday night should be reconsidered en banc, which means before 11 federal judges of the Ninth Circuit. It’s not clear if this means that this judge (who was not named in the order) believes that there are enough votes to overturn the lower court’s decision which put a temporary halt on Trump’s controversial travel ban or if the judge simply wasn’t satisfied with the panel’s decision. Regardless, it is an interesting move that could bode well for President Trump, and throws yet another legal twist into the ongoing court battle between Trump and those trying to prevent his controversial immigration ban from being enforced.

On Thursday night, in a big blow to the Trump administration, a panel of three Ninth Circuit federal judges refused to lift a stay which was issued by Seattle federal Judge James Robart.

Earlier today, Trump indicated that he did not plan to appeal the Ninth Circuit’s decision to the U.S. Supreme Court or request an en banc review by the full Ninth Circuit panel. Instead, his attorneys said they planned to fight the case on the merits in the lower federal court. But then minutes after one White House official said the Trump administration would not appeal to SCOTUS, White House Chief of Staff Reince Priebus told The Washington Post that they are actually still “reviewing all of our options in the court system.” Regardless, federal judges are allowed to call for an en banc vote themselves even if neither party petitions for a rehearing.

Chief Judge Sidney Thomas of the 9th Circuit Court has instructed both Trump’s DOJ team and lawyers for the State of Washington and Minnesota to file briefs due by Thursday February 16th, stating whether they believe the motion should be considered en banc. To get a rehearing, a majority of the 29 active judges on the court would need to vote in favor. Some legal experts contend however that it is unlikely that a majority of judges (most of whom were appointed by Democrats) would agree to this.

Stay with LawNewz.com for the latest developments on this breaking story. We will update this post accordingly. This post has also been corrected to note the number of judges on the Ninth Circuit.