Before He Saved Them, Trump Sued Carrier for ‘Inoperable’ Air Conditioning Units 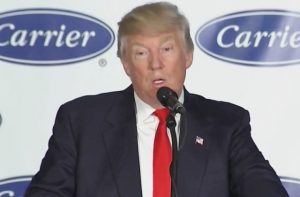 This week, President-elect Donald Trump completed his victory lap announcing that he’d helped save more than 1,000 jobs at Carrier Corporation from going to Mexico by offering a handsome package of tax incentives. As a legal website, we’ve been digging into Trump’s lawsuits for months now. But, after getting a tip, we found another one that we hadn’t previously discovered. Back in 2003, Trump actually sued the very company that he’s now saved!

Trump International Hotel & Tower sued Carrier Corporation for negligence and breach of warranty after two large pieces of air-conditioning equipment apparently failed. Trump claimed he suffered about $600,000 in damages and had to deploy his own resources to fix it. Funny thing, according to a judge’s order in the case, it was apparently Trump’s own employee and on-staff equipment operator who started one of the chiller units without noticing that the valve supplying pressurized water to the unit was in a closed position. This caused the water inside the chiller to solidify in the tubes, causing damage. However, Trump’s lawyers claimed that Carrier caused the freeze-up by improperly servicing the unit.

I’ll save you the boring details. Bottom line: This case stretched on for another 4 years! Carrier tried to get it dismissed. Federal Judge Shira Sheindlin issued an order on October 23, 2007 allowing it to move forward, but dismissing Trump’s claims of negligence. Several weeks later, according to the court docket, it appears Trump and Carrier came to an undisclosed settlement agreement, and that was that.

USA Today has documented that the President-elect has been involved in more than 3,500 lawsuits over his career. And he could be caught up in as many as 75 lawsuits as President.

On Thursday, in front of Carrier’s factory in Indianapolis, Trump announced he helped with a deal which would keep hundreds of jobs in the state. As Trump’s relationship with Romney proves, he apparently doesn’t hold a grudge for very long.