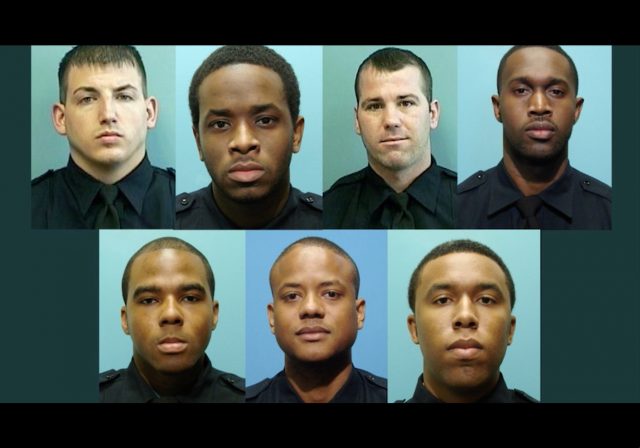 The Baltimore State’s Attorney’s Office on Monday announced it was in the process of reviewing cases that resulted in convictions based largely on the word of seven officers indicted last week in federal court on racketeering charges.   According to one public defender, there could potentially be “thousands of cases” in which the testimony of these officers was used to obtained convictions.

Baltimore’s deputy public defender, Natalie Finegar, told the Baltimore Sun newspaper that “potentially thousands of cases” could be affected by the announcement.  Finegar claims that her office has already been contacted by approximately 200 people asking for help and says the review is necessary because even cases where the client pleaded guilty were “made in the dark.”

The decision to conduct the review stems from the indictment of seven officers that worked as part of a plain clothes unit in mostly high crime areas of Baltimore.   According to the report, Sgt. Wayne Jenkins and detectives Momodu Gondo, Evodio Hendrix, Daniel Hersl, Jemell Rayam, Marcus Taylor and Maurice Ward were all indicted last week on charges ranging from robbing and extorting citizens to filing false police reports and affidavits, and even filing false overtime requests.

Prosecutors reportedly started dropping cases almost immediately after the indictment was announced and the report cites one case that was literally just moments away from going before a judge when the prosecutor received a text message and asked for an immediate delay.  The charges in that particular case were later dropped.

Despite the rapid action in some cases, the defense attorneys seem to acknowledge that the process of overturning some convictions is likely to be very difficult, especially in cases involving plea deals.  During a plea hearing, the judge generally asks a number of very specific and detailed questions of the defendant, making it very difficult to later go back and attempt to throw out the agreement at a later date.  As such, most defendants will need to point to specific evidence of harm in their individual case, as opposed to simply pointing to an overall pattern of misconduct involving the officers.

This task is likely to be made more difficult, as a lawyer for one of the accused cop’s pointed out, by the fact that the indictment has not charged any of the seven officers of planting evidence against defendants.

“I don’t know if we’re cutting off our nose to spite our face by pillorying these officers and making it easy for folks to get out [of jail],” said Warren Brown, the attorney for Detective Gondo.

Nonetheless, the decision by the state’s attorney’s office to review a number of the cases could ultimately help lessen the burden in some cases.  It seems to represent an acknowledgment by the prosecution that some of the convictions, even plea deals, were not obtained on a level playing field.   It may also help defense attorneys turn up additional evidence against the cops that they may not have otherwise been known.

The federal investigation was reportedly kept secret from anyone at the local level, including the state’s attorney’s office.

In addition to the announcement to review cases, the Baltimore Police Commissioner formally announced an end to the use of plain clothes police units in the city.