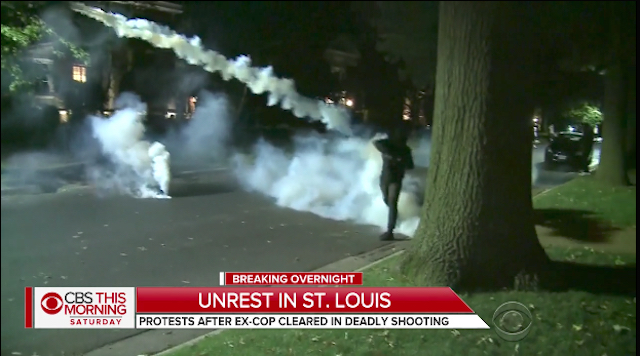 ST. LOUIS (AP) — The American Civil Liberties Union of Missouri filed a lawsuit against the city of St. Louis on Friday over what it called “unlawful and unconstitutional action” during demonstrations that followed the acquittal of a white former police officer in the death of a black man.

The suit accuses police of misconduct by using chemical weapons, interfering with video of police activity and violating due process. It seeks an order requiring police to act within the bounds of the U.S. Constitution.

Koran Addo, a spokesman for Mayor Lyda Krewson, declined comment, saying the mayor’s office has not seen the lawsuit, which was filed in St. Louis Circuit Court.

More than 160 people have been arrested since demonstrations began Sept. 15 after a judge found Jason Stockley not guilty of first-degree murder in the 2011 death of Anthony Lamar Smith. Most of those arrests were on the night of the ruling and Sunday.

During some of the protests, several businesses’ windows have been broken and items have been thrown at police. Police at times have used tear gas and pepper spray on protesters.

Some bystanders and at least one journalist were caught up in the arrests, especially on Sunday night, when more than 120 people were arrested in downtown St. Louis — all but three of them for “failure to disperse.” Those arrests came after police used a process known as “kettling” to box in demonstrators and others.

Police said people were arrested only if they lingered after being ordered to disperse, but some people said they were unable to leave because police had boxed them in. Among them was Mike Faulk, a journalist for the St. Louis Post-Dispatch. The newspaper has demanded that charges be dropped. Neither Faulk nor the newspaper is part of the ACLU’s lawsuit.

The ACLU filed the suit on behalf of two women who took part in protests. One, Maleeha Ahmed, who was sprayed in the face with pepper spray on Sept. 15, said she was protesting for justice and peace when police confronted her.

“If it hadn’t been for my fellow peaceful protesters — strangers who came to my aid — I don’t know how my eyesight would be today,” Ahmed said. “I would have been left out in the sun, on the ground, with my face burning.”

Stockley shot Anthony Lamar Smith, who was a drug suspect, following a vehicle chase. Stockley insisted he saw the 24-year-old Smith holding a gun, but prosecutors said the officer planted the weapon in Smith’s car after the shooting.

Protesters have targeted various places around the St. Louis area since the verdict, including trendy areas of bars and restaurants, shopping malls — and even a Billy Joel concert.

On Thursday, a “White Allies Only” protest in downtown St. Louis drew several hundred people, most of them white. They marched to Busch Stadium, where about 40,000 people were watching the singer perform.

Protesters have marched through two St. Louis County malls — West County Center and Chesterfield Mall — and blocked traffic outside a third, the Galleria.

On Friday evening, about 150 protesters gathered outside the St. Louis Outlet Mall in the north St. Louis County town of Hazelwood, but the mall and all its stores had closed early because of the planned demonstrations. Organizers had everyone carpool to nearby St. Charles, which was overrun with thousands of people attending an Oktoberfest event.

The protesters marched on St. Charles’ Main Street, but no problems were reported.