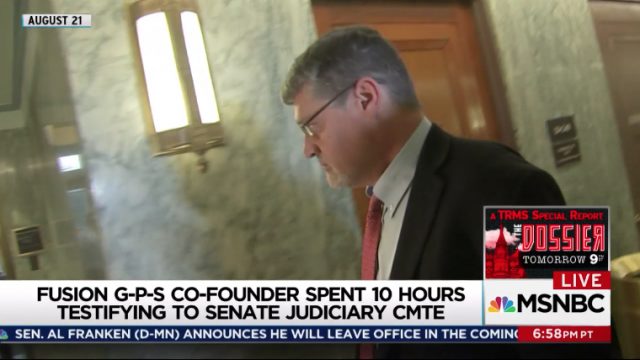 The Senate Judiciary Committee just released a 312-page transcript of a hearing between committee members and Glenn Simpson, the man whose firm, Fusion GPS, investigated whether the campaign of President Donald Trump had untoward connections to Russia. Simpson worked for the Wall Street Journal and, prior to that, the D.C. newspaper Roll Call before going to Fusion GPS.

Law&Crime‘s legal analysts Aaron Keller and Colin Kalmbacher reviewed the entire 312 pages. Chief among the bombshells are mentions of the pee tape and the death of a source. Here are eight key takeaways:

(1) Fusion GPS seemed to know an awful lot about Russia. Fusion GPS’s research involved digging into Russian mobsters, wealthy investors with ties to Russia, Russian tax avoidance schemes, and Russian business schemes. The investigative attorney for Republican Chairman Grassley was really interested in Russia-related work Fusion GPS had done in the past. Fusion GPS had been hired by law firm Baker Hostetler to research the Prevezon Holdings litigation, which involved claims that $230 million was fraudulently taken from the Russian treasury and used to buy property in Manhattan. Fusion GPS also had been hired to research the Magnitsky Act, which attempted to block certain Russian operatives from using the U.S. banking system after they purportedly caused the death of a Russian tax accountant in a Russian prison in 2009.

(2) The investigation was open-ended in scope, but not in time. Simpson described Steele’s project for Fusion GPS as “open-ended in scope.” He also noted, however, that “it wasn’t open-ended in time.” Simpson continued, noting, “It was take a few weeks, see if there’s anything there that’s interesting, notable, important, and if we think there’s reason to go on we’ll make that decision at that time. So it was a short-term engagement in the beginning.” During this exchange, Simpson also noted that Steele was basically given free reign–that Fusion GPS didn’t direct him to pursue particular avenues.

(3) Christopher Steele thought Trump was being blackmailed. Steele pressed for the dossier contents to be treated like a national security issue and it was his suggestion to bring the information to the FBI. After Steele made his case about the potential blackmail, Simpson thought about it and eventually agreed it was proper to bring Steele’s concerns to the FBI. Simpson said, “I agreed, it’s potentially a crime in progress. So, you know, if we can do that in the most appropriate way, I said it was okay for him to do that.” The ultimate decision, according to Simpson was between Steele and himself–and no one else.

(4) Everyone went out of their way not to mention the pee tape. Some folks talked about it, of course, but couldn’t bring themselves to actually reference the filmed watersports by name or even describe the incident. Here’s one such interaction between Simpson and Heather Sawyer, Chief Oversight Counsel:

Sawyer: And with specific regard to the issue of blackmail, what was the — what were the facts that he had gathered that made him concerned about the possibility of blackmail and who did he think was going to be blackmailed.

Simpson: Well, the facts are — beyond what’s here don’t have any additional facts. The alleged incident that’s described here is the one that he was referring to. As I say, I don’t have really any additional information beyond this except that — I mean, it’s probably in here somewhere actually, but it’s well known in intelligence circles that the Russians have cameras in all the luxury hotel rooms and there are memoirs written about this by former Russian intelligence agents I could quote you. So the problem of kompromat and kompromating is just endemic to east-west intelligence work. So that’s what I’m referring to. That’s what he’s referring to.

Sawyer: Got it. So that would be in the summary the kind of third dash point down where it mentions —

(5) Steele talked to the FBI on multiple occasions but then broke it off. Simpson said, “[Steele] said, hey, I heard back from the FBI and they want me to come talk to them and they said they want everything I have, to which I said okay. He said he had to go to Rome, I said okay. He went to Rome. Then afterwards he came back and said, you know, I gave them a full briefing.”

The first admitted meeting occurred on July 5th–in Rome–a trip paid for by the FBI. The second admitted meeting between Steele and the FBI occurred during “Mid to late September,” Simpson said, and was a “debriefing.”  Then, on October 31, after The New York Times ran an article about an investigation into Trump’s possible Kremlin contacts, Steele ceased contact with the FBI. Simpson said, “He didn’t literally tell me about specific contacts. I just recall that there was — that he broke off, which implies that he told him he didn’t want to have anything more to do with them.”

(6) The FBI relied on a source within the Trump campaign to verify some of the dossier’s information. Simpson noted, “Essentially what [Steele] told me was [the FBI] had other intelligence about this matter from an internal Trump campaign source and that — that they — my understanding was that they believed Chris at this point — that they believed Chris’s information might be credible because they had other intelligence that indicated the same thing and one of those pieces of intelligence was a human source from inside the Trump organization.”

When pressed as to who that person might have been, Simpson’s attorney claimed a security privilege and had his client refuse to answer the question.

(7) There’s a few key redactions. One such redaction is Steele’s FBI contact. Steele’s man in Rome is referenced on multiple occasions but always blacked–or whited–out. Also, somewhat more curiously, are redactions related to Fusion GPS. Some of that information makes sense: bank account information and such. But multiple Fusion GPS employees’ names are blacked out as well. Kind of makes you wonder.

Foster: So without getting into naming the sources or anything like that, what steps did you take to try to verify their credibility?

Simpson: I’m going to decline to answer that.

Levy: It’s a voluntary interview, and in addition to that he wants to be very careful to protect his sources. Somebody’s already been killed as a result of the publication of this dossier and no harm should come to anybody related to this honest work.