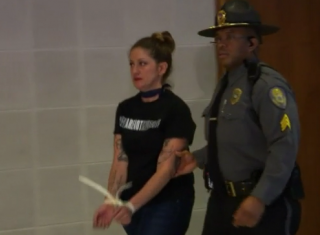 The North Carolina law requiring bathrooms at schools and public agencies to be designated based on a person’s sex at birth has drawn outrage from transgender supporters. Demonstrators marched to the North Carolina state house on Monday, with 54 protesters being arrested and sent to Wake County Jail, CNN reported.

This is the arrest process, one protester at a time. Rinse. Repeat. #ncpol #HB2 pic.twitter.com/w9K3tHMuux

Backlash against the law has been widespread and highly publicized. PayPal canceled plans for a headquarters in North Carolina. Demi Lovato, Nick Jonas, and Bruce Springsteen have backed out of scheduled concerts. Springsteen said in a statement that the cancellation ” is the strongest means I have for raising my voice in opposition to those who continue to push us backwards instead of forwards.” President Barack Obama and Republican Presidential candidate Donald Trump have both spoken out against the law.

Discussing companies like PayPal who have pulled business from North Carolina, Republican State Representative Paul Stam said, “They have offices in countries where homosexuals are executed,” he said. “The hypocrisy of those who oppose this bill is amazing.”

GOP Presidential candidate Ted Cruz has come out in support of the law, stating it is necessary to protect women and children from sexual assault.

Democratic State Representative Darren Jackson filed a bill to repeal the law. He said to CNN, “North Carolina is so much better than this.”