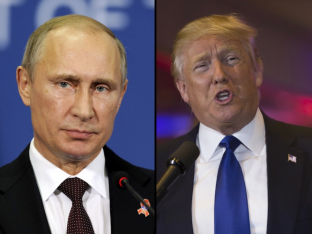 Forty six additional electors have joined an effort demanding a full intelligence briefing on any alleged ties between President-elect Donald Trump and Russian leader Vladimir Putin. Originally 10 electors had signed on to the letter, which was first published on Monday, and addressed to Director of National Intelligence James Clapper. Since then, the number of signatures has grown from 10 to 56.  The 538 electors are scheduled to meet at the Electoral College on December 19, 2016.

The effort, spearheaded by elector Christine Pelosi (the daughter of Congresswoman Nancy Pelosi) asks for further information to determine whether “Mr. Trump is fit to serve as President of the United States.”

“The Electors require to know from the intelligence community whether there are ongoing investigations into ties between Donald Trump, his campaign or associates, and Russian government interference in the election, the scope of those investigations, how far those investigations may have reached, and who was involved in those investigations,” the letter, which was posted online, states. Of the fifty six who have signed the letter, only one is a Republican.  Earlier this month, GOP elector Christopher Suprun, from Texas, penned a piece in The New York Times explaining why he is refusing to vote for Donald Trump when the Electoral College meets next week.

So the question remains: do these electors have any legal justification in demanding this information?

As we explained earlier this week, legal experts tell LawNewz.com it will be tough for the electors to get what they are seeking.  However, there is a way that it could possibly happen, but it involves an often arduous process of receiving an interim security clearance. A process that President Obama could even help expedite, if he wanted to.

[A]s a general national security matter, elected government officials who do not normally get classified information – and that would include electors – and even private sector actors can be granted interim security clearances and then access to particular classified information.  It happens with some regularity in other contexts, such as law enforcement or intelligence matters involving multiple levels of government.  The Director of National Intelligence (DNI) is a key actor in that interim security clearance process, and potentially so too would be the President.  That is because as a matter of law and practice the Executive Branch’s classification authority and control over classified information inside the executive branch ultimately reside with the President, and the DNI is the central subordinate figure regarding both classification and intelligence matters.

So far, the DNI Director has not responded to the electors’ request.

Chris White contributed to this report