Active Shooting Reported at YouTube Headquarters — Here’s What We Know 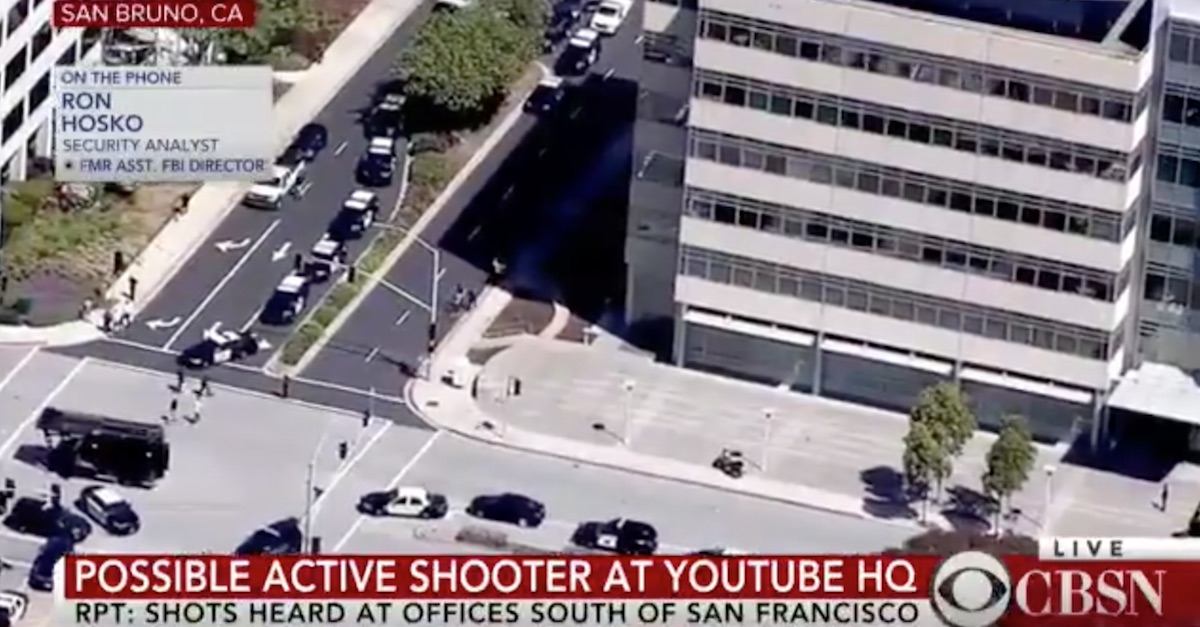 Reports of an active shooting at YouTube headquarters in San Bruno, California emerged Tuesday afternoon, along with messages from those identifying as employees who are or were hiding in safety as police swarmed the area.

Active shooter at YouTube HQ. Heard shots and saw people running while at my desk. Now barricaded inside a room with coworkers.

Safe. Got evacuated it. Outside now.

We were sitting in a meeting and then we heard people running because it was rumbling the floor. First thought was earthquake. https://t.co/gmolQmRXm1

After existing the room we still didn’t know what was going on but more people were running. Seemed serious and not like a drill.

We headed towards the exit and then saw more people and someone said that there was a person with a gun. Shit.

At that point every new person I saw was a potential shooter. Someone else said that the person shot out the back doors and then shot themselves.

I looked down and saw blood drips on the floor and stairs. Peaked around for threats and then we headed downstairs and out the front.

Police cruisers pull up, hopped out with rifles ready and I told them where the situation was as I headed down the street to meet up with a couple team members.

In an Uber omw home. Hope everyone is safe.

there's an active shooter at YouTube in San Bruno. from a whatsapp group I'm in. pic.twitter.com/N2wh1fYWih

Breaking: Police are responding to reports of an active shooter at YouTube headquarters in California. pic.twitter.com/3eOc6SjihA

San Bruno police confirmed that they were “responding to an active shooter” and advised people to stay away from the area.

We are responding to an active shooter. Please stay away from Cherry Ave & Bay Hill Drive.

Google Communications tweeted that they are coordinating with police and will provide updates when they are available.

Re: YouTube situation, we are coordinating with authorities and will provide official information here from Google and YouTube as it becomes available.

At least one reporter, Contessa Brewer, said that there’s “no longer an immediate threat” and that there are people being taken to Zuckerberg San Francisco General Hospital.

ABC7 reported, citing a law enforcement source, that the shooter is believed to be a white female.

NBC News has reported that the female suspect is dead at the scene.

BREAKING: YouTube shooter is a female and she is down, multiple law enforcement sources tell @NBCNews – @anblanxhttps://t.co/YQ0x5rJFwo

San Bruno Police Chief Ed Barberini said in a press conference that four were taken to a hospital with gunshot wounds and that a suspect was dead inside the building with an apparent self-inficted gunshot wound.

"We have four victims who have all been transported for gunshot related injuries. We have one suspect who is deceased inside the building with a self-inflicted wound," San Bruno Police Chief Ed Barberini says. https://t.co/mRdpyhYtJ0 pic.twitter.com/Qhga3bewcb

The YouTube shooter has been identified as 39-year-old Nasim Aghdam.

Her father said that she was mad at YouTube and that he warned police she was angry with YouTube.

BREAKING: Just spoke to the father of Nasim Aghdam. He says his daughter had been missing for several days. When cops found her in NorCal last night, he warned them she was angry with YouTube. @CBSLA pic.twitter.com/mgCw9ivqos

Police on Wednesday said they were not warned Aghdam might commit violence.

BREAKING: Police who talked to YouTube shooter before attack at company say family gave no warning she might commit violence.