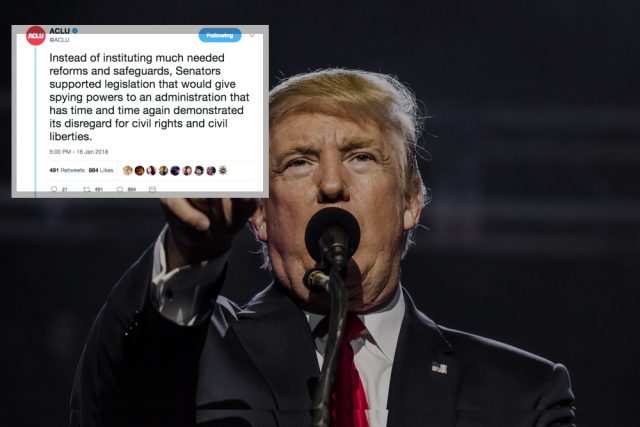 The American Civil Liberties Union (“ACLU”) torched U.S. senators in a tweetstorm on Tuesday over their votes in favor of giving the Trump administration increased warrantless surveillance powers.

In a series of updates sent starting at 4:58 p.m. on January 16, the ACLU’s official Twitter account set the stage by describing the basic contours of the law in question. They wrote:

Section 702 is used to spy on the emails, texts, and other electronic communications of Americans and foreigners without a warrant. The authority has been repeatedly abused by law enforcement, in violation of the Fourth Amendment.

The ACLU is referencing Section 702 of the Foreign Intelligence Surveillance Act (“FISA”). Originally passed in 1978, the FISA law was amended–and Section 702 was added–in 2008 after revelations that the George W. Bush administration had engaged in warrantless wiretapping for multiple years in the aftermath of the 9/11 terrorist attacks. An earlier version of essentially the same warrantless surveillance authority was contained in the Protect America Act of 2007–which expired in early 2008.

The ACLU continued, castigating the bi-partisan consensus on warrantless surveillance:

Members of both parties who voted in favor of this legislation should be sharply rebuked for supporting a bill that is in flagrant violation of the rights enshrined in the Constitution.

Then, in a particularly politically salient point, the ACLU took those politicians to the woodshed for gifting such powers of surveillance to President Donald Trump. They wrote:

Senators ignored the will of the people to give the president exceedingly broad powers to spy on Americans and individuals around the world.

The ACLU noted that the Trump administration has been heavily criticized over their record on civil rights and civil liberties. Indeed, many of the administration’s most visible critics–including Democrats Dianne Feinstein and Claire McCaskill and Republicans Jeff Flake and Bob Corker–ended up voting in favor of the Section 702 reauthorization bill. This likely did not escape the ACLU. They continued:

Instead of instituting much needed reforms and safeguards, Senators supported legislation that would give spying powers to an administration that has time and time again demonstrated its disregard for civil rights and civil liberties.

In all, 60 senators voted for cloture on the bill–the necessary number needed to end debate and eventually bring the final bill to the Senate floor for an up or down vote. Only 38 senators voted against expanding the executive branch’s warrantless surveillance powers. Senators McCain and Murkowski did not make the vote.

The ACLU’s tweetstorm ended on a somber but determined note, pledging to work for an end to the controversial provision. They wrote:

We will continue to work both in Congress and the courts to stop abuse of this authority.