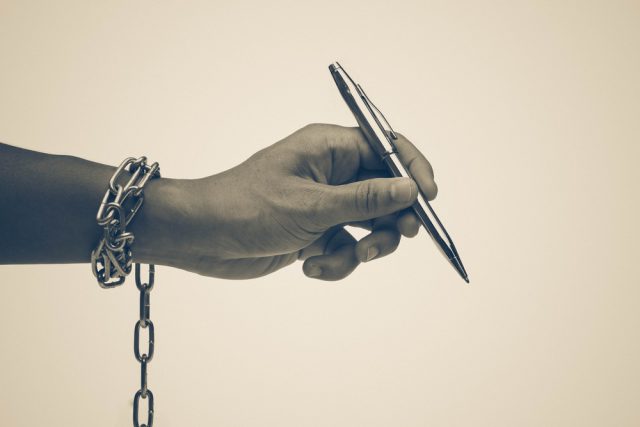 IOWA CITY, Iowa (AP) — An Iowa Supreme Court justice has taken the unusual step of temporarily ordering the state’s largest newspaper not to publish the contents of court records legally obtained by one of its reporters.

Press freedom advocates protested the order against the Des Moines Register and investigative reporter Clark Kauffman, and called on the full court Friday to immediately lift the stay.

The Iowa Freedom of Information Council, which represents media organizations and advocates for government transparency, called the action by Justice David Wiggins “extraordinary and very troubling.”

“We are hopeful the entire Supreme Court will quickly conclude that Justice Wiggins’ order goes too far and is an impermissible prior restraint on a free press,” said executive director Randy Evans.

Wiggins granted a temporary stay Monday that blocked the newspaper from publishing information obtained from records relating to Des Moines attorney Jaysen McCleary. McCleary argued the records contained private information about his disabilities and finances and were never intended to be public.

The records were inadvertently filed publicly by one of McCleary’s lawyers in a lawsuit he filed against the city of Des Moines that alleged he suffered injuries when he was hit in the head by a garbage container launched from a city truck. They consisted of reports from experts who had evaluated McCleary, and were available for months in the state’s electronic court records. The parties told the court they reached a settlement in November.

Days later, McCleary asked the district court to seal the reports after learning the newspaper had copies, arguing they were meant to be filed confidentially and were subject to an earlier protective order. District Court Judge Jeffrey Farrell sealed the records going forward. But last week he rejected McCleary’s motion to hold the newspaper in contempt of court, saying the filings had long been available to the public and the Register wasn’t subject to the confidentiality order.

McCleary had also filed a separate lawsuit against Kauffman and the newspaper, seeking a temporary injunction to prevent the publication of the records. In his public filing, McCleary said any story with information that included details about things like his old bankruptcy case and learning disability would cause “irreparable harm” to his right to privacy. He called the information “purely private facts which are not a matter of public concern.”

District Court Judge Eliza Ovrom denied McCleary’s motion for an injunction on Dec. 7, saying such an order would violate the First Amendment. She also rejected McCleary’s request to seal the case from the public.

Wiggins, the Supreme Court justice, issued a temporary stay after McCleary filed an emergency appeal to the high court. Wiggins said the stay would remain in effect until the court could rule on whether to take up McCleary’s case.

“Pending further order from this court, the defendants shall not disclose or share (other than with legal counsel) any information in the defendants’ possession that was obtained exclusively from the reports,” Wiggins wrote.

Separately, McCleary asserted that the newspaper planned to report that he was the “Attorney Doe” in a specific case in which the Iowa Supreme Court has “redacted all filings” and removed video of the oral argument.

Michael Giudicessi, an attorney representing the Register and Kauffman, argued in a filing Thursday that such a stay was a prior restraint on press freedom barred by the Iowa and U.S. constitutions. He asked the full court to vacate the order, which he called “an undesirable and unsustainable outlier in the law and policy of this state and this nation.”

He added: “McCleary’s conduct as a lawyer and the medical reasons he has relied upon to defend it are matters of public record.”