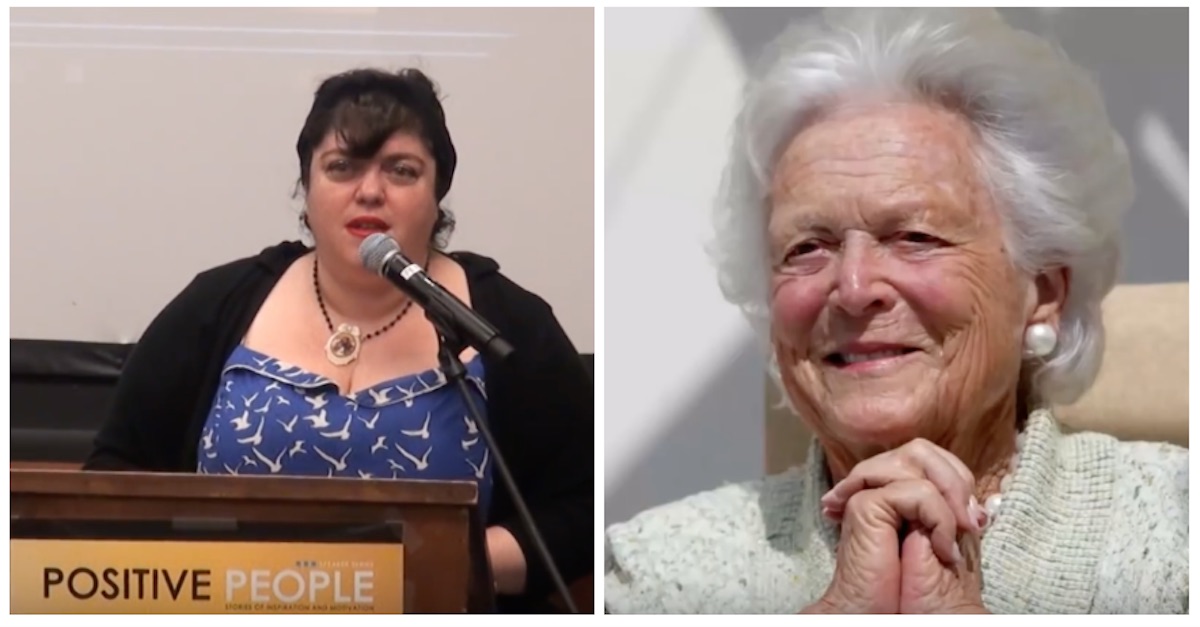 Fresno State University in California is responding to the controversy sparked by one of its educators who reacted to the death of former First Lady Barbara Bush by calling her an “amazing racist” and expressing her happiness that the “witch is dead” while boasting that her $100,000 salary and tenured professor status means she “will never be fired.”

It appears the university, which as a state school has different hurdles to jump than a private institution, is considering discipline of English Prof. Randa Jarrar, whose Twitter account and the tweets therein are now inaccessible to the public.

The tweets are still available for viewing online, as many who were outraged took screenshots of them.

“Barbara Bush was a generous and smart and amazing racist who, along with her husband, raised a war criminal. Fuck outta here with your nice words,” she said in her first tweet.

“PSA: either you are against these pieces of shit and their genocidal ways or you’re part of the problem,’ Jarrar added in her viral rant. That’s actually how simple this is. I’m happy the witch is dead. Can’t wait for the rest of her family to fall to their demise the way 1.5 million Iraqis have,” she said in another.

“I work as a tenured professor. I make 100K a year doing that. I will never be fired. I will always have people wanting to hear what I have to say,” she said in a third.

In response to the backlash, Jarrar identified herself as an Arab-American and Muslim-American woman and said the outrage is a case-in-point in different treatment.

“If you’d like to know what it’s like to be an Arab American Muslim American woman with some clout online expressing an opinion, look at the racists going crazy in my mentions right now,” she tweeted.

Fresno State President Joseph Castro, KSFN reported, has gone further than he did in his initial statement on Jarrar’s comments.

But Castro later said over the phone that the university is looking into the matter, i.e. investigating it, and vowed to “do the right thing.”

“[T]hese comments in no way define us. I reject them I condemn them and we will look at this matter carefully and do the right thing,” he said.

The local news outlet also reported that Castro said a review and examination of facts is underway, and that disciplinary action against Jarrar is a possibility, though the collective bargaining agreement, university policy and the law will have to be followed.

“This was beyond free speech. This was disrespectful,” Castro also said, according to the Fresno Bee.

Jarrar has been on a personal leave of absence for the Spring 2018 semester.

What can be done about Jarrar’s comments is currently the subject of debate.

While the university says, aware of its status as a government actor, that the right to free speech comes with the duty of responsibility — “A professor with tenure does not have blanket protection to say and do what they wish” — others argue that Fresno State will not be able to show that the public employee’s private speech on a public matter hindered “the effective and efficient fulfillment of [the school’s] responsibilities to the public,” citing cases Connick v. Myers and Pickering v. Bd. of Ed.

Staff attorney for ACLU of Northern California Abre’ Conner also said that there is a review of Jarrar’s tweets at all is “troubling.”

“It appears the professor was involved in protected speech on her own time. If Fresno State administrators are reviewing her based on this political speech, that is troubling,” she said.