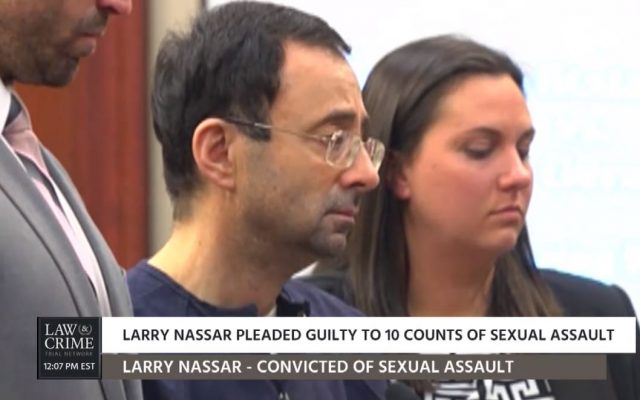 At least two Michigan lawmakers agree with a Law&Crime analysis which called state law there “pathetically weak” in the wake of the Larry Nassar sexual abuse scandal. Now, lawmakers from both major political parties are looking to push forward with reforms.

Michigan State Sen. Rick Jones, a Republican who represents several counties west of Lansing and who chairs the state senate judiciary committee, told Law&Crime it was time to “clean house” and “kick butt” in Michigan with stronger laws on the books. He also said it was time for a “pristine and clean” Michigan State University system. His minority party vice-chair, State Sen. Steve Bieda, a Democrat representing parts of Macomb County northeast of Detroit, wrote to Law&Crime that he, like many Americans, has been “[w]atching the Nassar case with a sense of both revulsion and horror.” Both senators are examining how changes to state law could better protect victims in future cases.

Law&Crime’s original analysis harshly questioned Michigan’s mandatory reporting law in suspected cases of child abuse. Many states, if not all states, require that certain groups of people report cases of child abuse, including sexual abuse, to external state authorities who are properly trained to handle investigations into such sensitive matters. Though Michigan state law requires some groups of people, including licensed medical professionals and teachers, to report suspected abuse to the Michigan Department of Health and Human Services, our Law&Crime analysis questioned whether the word “teacher” in that mandatory reporting law is broad enough to cover coaching staffs, college professors, or other college staff members. Arguably, the word “teacher” is not that broad; indeed, in some states, the requirement that “teachers” must report cases of abuse applies only to state-licensed teachers at elementary, middle, or high schools. Coaches, professors, and some school support staff members are not explicitly included in Michigan’s mandatory reporting law, nor are those professions included in the mandatory reporting laws in some other states. According to the victims who spoke at Larry Nassar’s sentencing hearing, many others knew of the abuse, but failed to stop it. This loophole in the law is — arguably — one of the reasons why.

For a mandatory reporter, a failure to report abuse carries a penalty:  jail time. However, if the definition of who is and who is not a mandatory reporter is too vague, prosecutors might be unwilling to go after those who are in positions to learn about abuse but whose job titles sit on the fringes of the law. Though a bold prosecutor might be willing to press a case under current Michigan law against professors, coaches, or support staff, a conviction would be risky, as it could be struck down on appeal on grounds that the law is too vague.

Michigan State Sen. Steve Bieda has already proposed changes to his state’s statute of limitations for child abuse cases in light of the Nassar case. However, Bieda also agreed, at least in principle, with our analysis which called for a stronger list of mandatory reporters. He said, in an email to Law&Crime:

My impression is that Michigan can have a significantly stronger statute, especially as to who is required to report. Michigan’s law includes a listing which is quite specific, enumerating a list of mandatory reporters who are required under penalty of law to report suspected cases of child abuse. For instance, while Michigan law requires teachers to report, it doesn’t specifically include coaches.

Michigan State Sen. Jones, the state senate judiciary committee chair who was once sheriff of Eaton County, one of two counties were Nassar admitted guilt, told Law&Crime by phone that he was “appalled by anybody learning of a sexual assault and not reporting” it to the proper authorities. Jones agreed that Michigan’s mandatory reporting law must be “broad enough that anybody who knew” of conduct like Nassar’s “should have reported” it, and, if any such person failed to do so, they should be able to be charged with a criminal offense.

The point of expanding the definition of mandatory reporting is simple.  Expanding the law forces investigations into the hands of trained outsiders and limits an institution’s ability to deal with things internally — or, in other words, to cover things up in an attempt to preserve an institution’s employees or financial coffers, which is what Nassar’s victims alleged happened.

An individual paid or unpaid, who, on the basis of the individual’s role as an integral part of a regularly scheduled program, activity or service, is a person responsible for the child’s welfare or has direct contact with children

That statute is broad enough to arguably allow no person in a position of trust and authority to wiggle out of reporting suspected abuse to the state and covers a myriad of people whose positions allow them to serve as confidants of a child who wishes to come forward with an accusation. It would seem to cover all coaches, regardless of whether they are volunteers, unaffiliated with a school, with a school, or with a college or university. It would also cover professors, college or university staff, public library workers, 4-H club organizers, and scout leaders as mandatory reporters.

You can read the list of everyone who is required to report abuse in Pennsylvania here.

And, under New Jersey law, literally “anyone” is required to be a mandatory reporter of suspected abuse. The New Jersey law is short and sweet:

Any person having reasonable cause to believe that a child has been subjected to child abuse or acts of child abuse shall report the same immediately to DCF’s Child Protection and Permanency (CP&P) by telephone or otherwise.

Law&Crime has reached out to a number of other lawmakers in both the Michigan House of Representatives and the Michigan Senate. We will continue to follow the story.