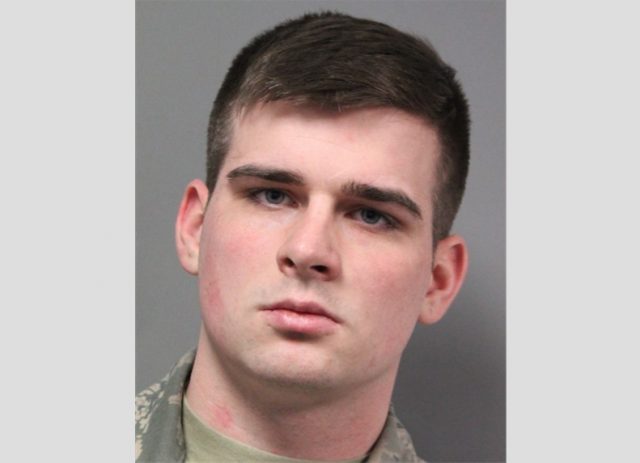 An airman stationed at Dover Air Force Base was arrested for allegedly raping a runaway 14-year-old girl, according to the Dover Police Department.

Zepplin Taylor-McGinness, 21, was charged with second-degree rape after he engaged in sexual activity with the girl on numerous occasions, according to WHYY.

The girl’s guardian contacted Dover police after learning that she was staying at the Dover Country Club Apartments with an unknown adult. Police say they responded to that call and found Taylor-McGinness in the apartment with the 14-year-old girl.

After the minor was located and returned to her guardian, the Dover Police Department and the Air Force Office of Special Investigations launched a joint investigation into the allegations. During that investigation, police say they learned that Taylor-McGinness engaged in sex acts with the girl several times since she began living with him.

Taylor-McGinness was arrested on Monday and charged with four counts of second-degree rape and one count of endangering the welfare of a child for harboring a runaway. He is currently being held in lieu of a $100,050 secured bond at the James T. Vaughn Correctional Center in Delaware.

It is presently unclear if Taylor-McGinness is represented by an attorney.

This incident isn’t the first of its kind for Dover Air Force Base. In 2016, two Dover airmen–Dalian Washington and Akeem Beazer—pleaded guilty to charges of sexual abuse of a minor. The two airmen allegedly picked up a 15-year-old girl for sex after she spoke with a social worker. Washington also pleaded guilty to charges of child sex trafficking.