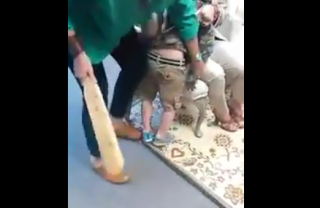 A Georgia mother was faced with a horrifying choice on Wednesday, when her 5-year-old son got in trouble for hitting and spitting on other students. The school said they can suspend the boy or paddle him, the Atlanta Journal-Constitution reported. While Shana Marie Perez was against school corporal punishment, which is allowed with parental consent in the Jasper County school district, she feared that one more absence for her son would land her in jail.

Just two weeks prior, Perez was arrested for truancy and temporarily locked up when her son missed 18 days of school. She claimed the some of the absences were due to doctor appointments, yet she was told that one more absence would land her back in jail. Fearing that the suspension would have meant just that, she opted for paddling, even though she had previously denied consent for her school to punish her son in that fashion.

While Principal Pam Edge and Assistant Principal Lynn McElheney tried to get the boy under control to administer the paddling, Perez recorded them on video, pretending to be texting.

The video doesn’t show the child getting hit, as the boy refused to cooperate, and reports vary as to whether he was actually paddled. School Superintendent Mike Newton did email Perez, saying that a suspension for her son would be an excused absence. Newton also told her that he would like to set up assistance to address the child’s behavior.