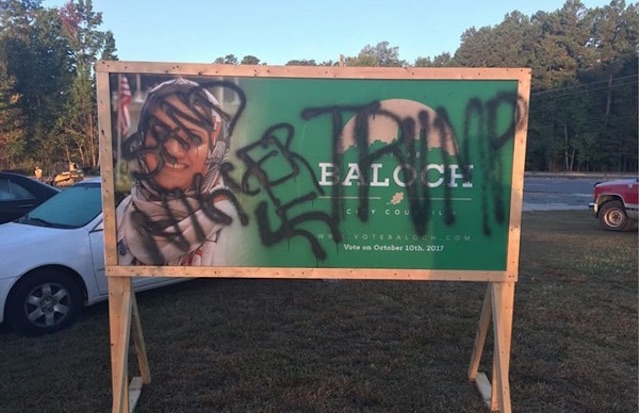 A Muslim city council candidate in North Carolina had one of her billboards defaced by an apparent Trump supporter late last week.

On the sign in question, Zainab Baloch‘s face is scrawled over with black spray paint reading, “SAND NIGGER,” followed by an unsuccessful attempt at a swastika. Next to the slur and symbol is the word, “TRUMP,” which covers the candidate’s campaign logo.

Baloch was born and raised in Raleigh, North Carolina. She is currently a state employee with the North Carolina Division of Mental Health and attends the University of North Carolina at Chapel Hill as a graduate student where she’s finishing up her Master’s degree in public administration.

Her campaign website sounds multiple progressive notes. In an essay entitled, “What We’re Up Against,” Baloch notes one of the major reasons why she’s running. She writes:

We can no longer continue to defer to existing policies and say, “We’ve done enough!” Not when minority communities are suffering from disproportionate arrests, profiling, and use-of-force.

Baloch’s critique of systemic racism–along with her status as a Muslim–apparently made her a prime target for the racist vandalism.

In response, she said, “To be honest, this hurts. There’s no way around it. I’m still a human being, I’m still a person, and I still have feelings.”

Baloch’s campaign manager Lindsay Vandenbroeck addressed the vandalism in an online video posted Friday. She said, “This will not stop us if this is the goal of something like this. Zainab is promoting diversity and inclusion. This is unacceptable; this will not deter our campaign in any way, shape or form.”

The Raleigh community rose in support of Baloch after the incident.

One artist re-painted the defaced sign. Local painter Anna Podris said, “There’s been such a long tradition of artists using their cause for social justice, and so I wanted to use this opportunity to turn this hateful message around.”

This is absolutely reprehensible. There is no place for racist rhetoric anywhere in the City of Raleigh. One of the things that makes Raleigh great is our diversity. We are an accepting community that embraces all of our citizens. Raleigh is stronger because we work together to lift each other up. Anything that tries to tear us apart will not be tolerated.

I stand with Zainab Baloch. Hate and intolerance are unacceptable!