Teacher told Third Graders: ‘Settle Down, or I’ll Let Gunman in to Shoot You’ 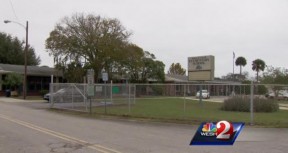 A substitute teacher at Daytona Beach elementary school became so upset with her rowdy students that she allegedly told them she would have them shot if they did not settle down.

WESH 2 in Orlando reports that the 61-year-old substitute was just a few hours into her first day on the job when she allegedly told her third grade class that she would allow a gunman into the classroom to shoot them if the did not stop misbehaving. All the classrooms at Turie T. Small Elementary School have doors that open directly to the outside and the teacher also reportedly dangled the door keys in front of the children, threatening to unlock the door to allow a gunman into the room.

According to reports, all students in the classroom relayed the same story, and the substitute was escorted off school grounds. An assistant principal sent a recorded message to all parents, saying the school and district took the incident very seriously and a school resource officer documented the incident in a police report.

The father of one student said his son was very shaken by the incident and that he had to spend quite a bit of time reassuring the child that he would be safe going to school.

A school district spokeswoman could not explain the substitute’s “extreme lack of judgment”, but said the sub had completed all required training and passed a background check prior to becoming a substitute teacher, and previously worked in an after school care program without any problems.

The spokeswoman added that the district has made sure that this substitute will no longer be teaching or eligible for any job in the Volusia County school system.