In Travel Ban Denial, Judge Jabs at Trump, Compares Him to Colin Kaepernick 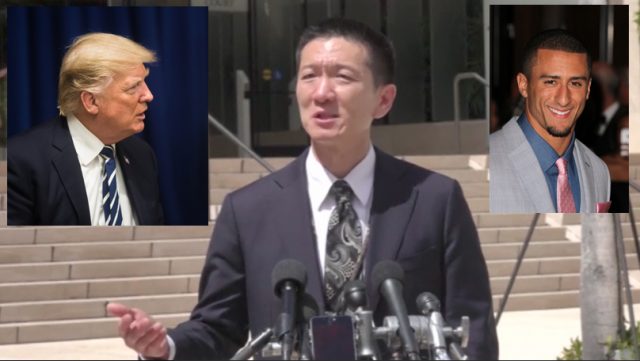 Travel ban 3.0 has–at least temporarily–gone the way of the dodo.

And the judge who legally eviscerated the ban did so by starting off his order comparing President Donald Trump to former 49ers quarterback Colin Kaepernick.

Let’s rehearse the basic facts as of yesterday: The ban both supporters and opponents understand as an attempt to ban most Muslims from entering the United States has been struck down–except for the parts which have nothing to do with Muslim-majority countries.

Instead, Judge Derrick K. Watson has left a cartoon version of the ban intact.

LawNewz reported on Watson’s one part civics lesson, one part Constitutional lecture and one-part trolling of Trump yesterday immediately after the order was released. Instead of the administration’s hoped for outcome, there’s now a Muslim ban which doesn’t ban Muslims–but which does place heavy restrictions on North Koreans and Venezuelans hoping to make it into the country.

Less legally important, however, nearly as troll-worthy is how Watson began his order.

In the preamble to that order striking down most of the ban is non-legally binding language–what lawyers and legal scholars refer to as “dicta” in these circumstances–which appears to be specifically engineered to upset Trump.

That dicta compares the president to Colin Kaepernick. The language is not explicit and the name of the former NFL star–and current celebrity activist–is nowhere mentioned in the ruling. But it’s easy enough to see through Watson’s wording here.

Professional athletes mirror the federal government in this respect: they operate within a set of rules, and when one among them forsakes those rules in favor of his own, problems ensue. And so it goes with EO-3.

(In the ruling, “EO-3” is used as a shorthand reference for President Trump’s third attempt to institute a travel ban focused on Muslim-majority countries. Trump’s directive was not an executive order, however, but what’s known as a presidential proclamation–his 75th attempt to govern by fiat through such a method; Trump has issued 92 total proclamations thus far. As for executive orders, specifically, Trump has governed with them on more than three occasions–49 EOs have been issued by Trump as of this week.)

Of course, nowhere else in the 40-page ruling is any other mention of professional athletes–or athletes generally. The case before Watson had nothing to do with sports and his inclusion of the reference to professional athletes can be read as a curious instance of dicta included in an official federal court ruling with the express purpose of hurting the president’s feelings.

To be clear, Watson is not citing rule-forsaking professional athletes in a positive light. And, he doesn’t even really get the facts right, because Colin Kaepernick is not alleged of violating any of the NFL’s internal rules for players–or any rules for that matter (except for maybe decorum). Rather, it’s an attempt by Watson to punch left because of his well-earned reputation as an anti-Trump judge. So, he’s compared Trump to someone Trump publicly hates–and expressed plausibly deniable disdain for Kaepernick’s protest as well.

Watson was appointed to the bench by President Barack Obama in 2012 and 2013.