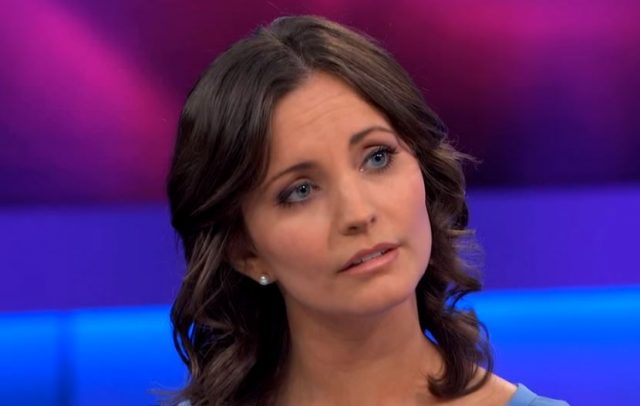 Teen Vogue columnist and feminist Emily Lindin posted a series of tweets Tuesday night about false sexual harassment and assault allegations against men. Her hot take: she’s fine with it. “I’m actually not at all concerned about innocent men losing their jobs over false sexual assault/harassment allegations,” Lindin said at the beginning of a string of comments. Her Twitter profile has gone private since then, as the response hasn’t exactly been kind, but here’s a screenshot of the opening remark. 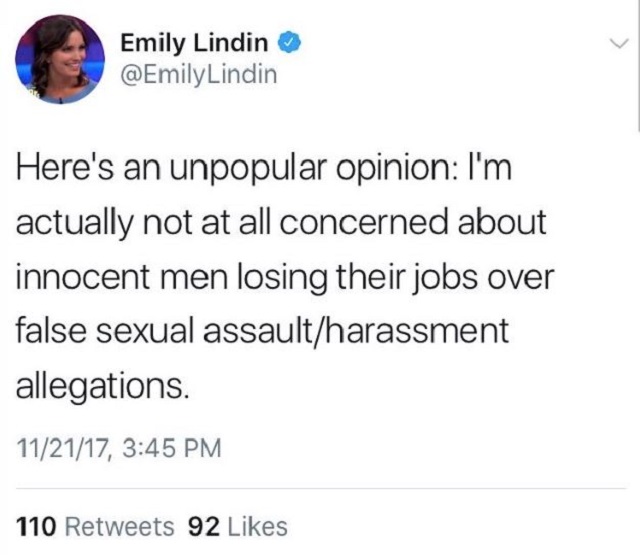 Lindin went on to explain that such situations don’t occur very often. “First, false allegations VERY rarely happen, so even bringing it up borders on a derailment tactic. It’s a microscopic risk in comparison to the issue at hand (worldwide, systemic oppression of half the population),” she tweeted,

Lest one think that her lack of concern is solely due to these things not happening, Lindin made it very clear she believes that even when innocent men are ruined by false allegations, it’s all worth it for the greater good.

“The benefit of all of us getting to finally tell the truth + the impact on victims FAR outweigh the loss of any one man’s reputation,” she said, adding, “If some innocent men’s reputations have to take a hit in the process of undoing the patriarchy, that is a price I am absolutely willing to pay.”

Forget about due process or “innocent until proven guilty.” Lindin apparently feels that these are useless obstacles in the way of tearing down the real monsters, and if actual good people’s lives are damaged while bringing down the bad guys, she has no problem with them being martyrs for the cause.

Lindin justifies this by saying that countless women have been unfairly harmed, so it’s fair play if a man suffers too.

“How many of our reputations have suffered unfairly? How many of our lives have ALREADY BEEN destroyed because of physical violence against us? Why was that acceptable, but now one man’s (potentially) unfair loss of a career opportunity is not?”

CNN’s Jake Tapper was among the many to respond to the tweet storm.

I’m guessing you didn’t get a good grade for your 7th grade book report on To Kill A Mockingbird. https://t.co/3M5Af7jIqn

After his snarky comment was met with doubt as to whether he really read Lindin’s whole rant, Tapper responded:

I read the thread. You said “if some innocent men’s reputations have to take a hit in the process of undoing the patriarchy, that is a price I am absolutely willing to pay.” That’s immoral. And it’s not a price *you* would be paying, btw. It would be innocent men doing that.