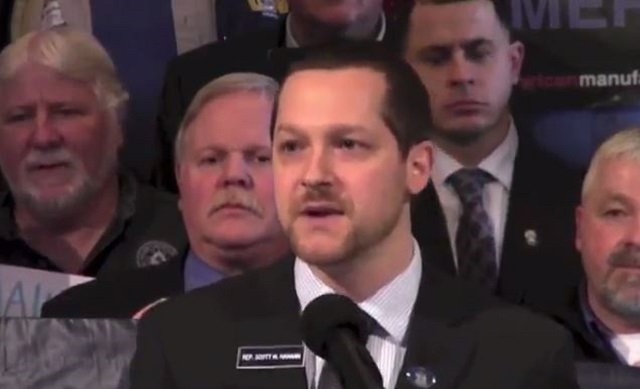 Jeez, Scott Hamann, tell us what you really think! The Democratic State Representative in Maine blasted President Donald Trump and his supporters in a wild Facebook post Tuesday night, doing everything from likening the First Family to organized crime to cursing out those who support them, and he even threw in a possible death threat to the President for good measure.

It’s tough to decide where to even begin with this one, but you can find the whole thing in a screenshot tweeted by the Maine Republican Party (the original post has since been deleted, no surprise there). Choice quotes are when Hamann refers to Trump as an “out of the closet racist” and “admitted rapist,” and to his family as “the Trump crime family.”

That’s arguably nothing compared to what Hamann had to say about the person the post was directed to, who he later said was a childhood friend. “Well then fuck you, snowflake. You’re a fucking pussy,” he said. “And you people are destroying America.” Earlier in the post, he said, “Trump is a joke, and anyone who doesnt [sic] have their head of their ass understands that.”

Noting his own foul language, Hamann said, “See, it’s not only Trump supporters who can talk like complete assholes. As long as that’s what’s coming out of that side, then I’ll match you dumb fucks word for word.”

To cap it all off, Hamann said, “Trump is a half term president, at most, especially if I ever get within 10 feet of that pussy.” This prompted another Facebook user to reply, “Scott Hamann you plan to kill the President?”

Words cannot even begin to describe the level of revulsion I feel after reading Representative Scott Hamann’s recent tirade that has come to light. Perhaps the most alarming aspect of this tirade is an implied death threat against our President ….The best way I can describe these comments is simple: unhinged and dangerous.

In a statement on Wednesday, Hamann said, “I regret my impulsive decision to post something aggressively sarcastic and inappropriate in a Facebook exchange with a childhood friend.” He explained, “This is not language I typically use, it does not reflect my personal values, and while misguided, it was intended to make a visceral point about the devolving political discourse in America.”