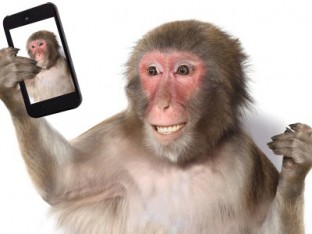 Apparently, monkeys are not equal under the law—or at least not Copyright law.  The ruling stems from a lawsuit filed last year by People for the Ethical Treatment of Animals (PETA) in California. PETA wanted a court order allowing them to represent the 6-year-old monkey who took the photo you see below—- and also have a say in the proceeds that the photo generated. A judge said they don’t have the same protections.

The U.S. District Judge William Orrick in San Francisco said while Congress can extend the protections of the laws – to humans– there is no indication that includes animals.

The photos in question were taken by the monkey during a 2011 trip to Sulawesi, Indonesia, by a British Nature photographer.

This story is generating some pretty entertaining tweets. 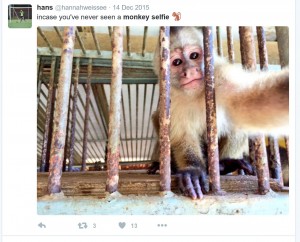 The U.S. Copyright Office agrees with the judge’s ruling. They issued a 2014 update to the copyrights regulations – specifically pointing out the rules only cover humans. Oh, the law also doesn’t cover “elephant portrait panting” or “divine or supernatural gathering,” according to The National Journal. So, go ahead, make your cat take selfie — but don’t expect to reap the benefits of its proceeds.