Angry Man Who Wasn’t Searched Tells Security ‘I Have a Bomb’: Cops 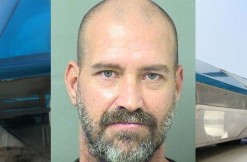 A Florida man was so mad he wasn’t searched at a government building, he allegedly said he had a bomb. We get it. Security is paramount. David Armstrong, 51, faces charges for making a false report about a bomb, Delray Beach Police day.

Here’s the story. Armstrong had noticed something strange when he stepped into the Palm Beach County Health Annex. Nobody searched him, and he wouldn’t stand for it, according to a report by the Palm Beach Post.

So he told the staff members what was what.

The staff member reportedly told him he shouldn’t say that, but Armstrong allegedly countered with perfect logic, “They check bags at the Social Security Office, but don’t check them here?”

According to the cops, Armstrong told them he asked a security guard how the Annex could handle a bomber. In any case, police say they didn’t find any bombs on him.

Armstrong’s bail hearing happened Tuesday, and he needed to put up $3000 on bond. Making a false bomb report, as he’s accused of doing, is a second-degree felony in Florida. That could mean a 15-year prison sentence, and a $10,000 fine.