Unfortunately Whoever’s Behind Deceptive State Dept. Footage Edit is Off The Hook (Legally) 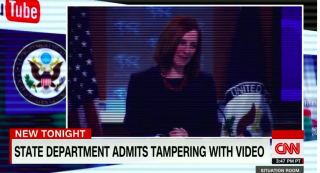 There has been an uproar since the shocking admission on Wednesday that the State Department intentionally edited a portion of a press briefing to take out an answer that put the department in a bad light. Many are calling for the unnamed official who ordered the edit to be held accountable for his/her actions.

Fox’s Dana Perino (a former White House Press Secretary herself) even called what happened illegal. “It is a violation of the Federal Records Act. It has to be,” she said.

I did some research into the legal aspects of this controversey. And, yes, what happened was dishonest, sneaky, and no doubt further chips away at the State Department’s already suffering credibility, but, unfortunately, it does not appear anyone violated the law with this edit. I’ll explain more in a bit, but first some background in case you aren’t following the case closely.

On Wednesday during a press briefing, John Kirby, a state department spokesperson, admitted:“There was a deliberate request [to delete the footage] – this wasn’t a technical glitch.”

Specifically, during a 2013 press briefing, Fox News reporter James Rosen had asked about secret talks underway between the U.S. and Iran. “There are times where diplomacy needs privacy in order to progress. This is a good example of that,” former spokesperson Jen Psaki replied at the time. That reply mysteriously disappeared when the State Department posted the press briefing on its official website and its Youtube Channel. When Rosen noticed it and questioned Department officials, they at first first said it was a “glitch.” Only to come out with the truth this week that, yes, it was intentional.

The mainstream media has gone nuts with this one. Even CNN’s Jake Tapper called out the State Department for its mess of lies. “Just as the public has a right to know the truth,” Tapper said, “we have a right to know who lied to us. And why.”

Understandably, there is a burning need to hold someone accountable.  Several commentators have mentioned a violation of the Federal Records Act. However, unfortunately, there doesn’t seem to be anything illegal here. The State Department apparently decided on their own to post a version of  the press briefing on its website, and YouTube channel. As a way to promote particular policy objectives, government agencies frequently post edited videos like this one from the USDA which promotes nutrition in schools.  The edited State Department footage is, of course, a little different from a “everyone be healthy” promotion but, regardless, the same legal principles apply. The State Department was allowed to do it.

Where they could have gotten into some legal hot water was, if, for example, LawNewz.com had asked for a copy of the State Department’s 2013 press conference through the Freedom of Information Act. If we had received an edited copy back (that left out that soundbite)… that would be a clear violation of the law.  To my knowledge, that’s not what happened here.

“A voluntary agency disclosure such as here implicates neither the Freedom of Information Act nor the Federal Records Act, and is not of violation of any law that I know of, ” Dan Metcalfe, former director of the Justice Department Office of Information and Privacy, told LawNewz.com.  The Federal Records Act involves the creation, maintenance, preservation, and entails the disposal of records, but does not address a situation like this because the State Department never deleted the record. In fact,  the full version has been replaced on its website, which had been archived in theDefense Video and Imagery Distribution system website (DIVIDS).

And, unfortunately, it also looks like the State Department didn’t have any internal rules about this sort of thing either.

“To my surprise, the Bureau of Public Affairs did not have in place any rules governing this type of action therefore we are taking immediate steps to craft appropriate protocols on this issue as we believe that deliberately removing a portion of the video was not and is not in keeping with the State Department’s commitment to transparency and public accountability,” State Department spokesman John Kirby said.