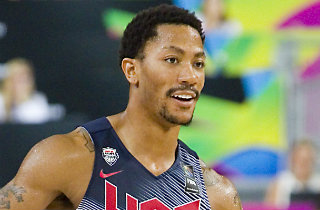 On Tuesday, the civil case accusing NBA star Derrick Rose of rape took another turn when the trial judge told counsel for both sides that he’s considering a mistrial as well as a new trial in the case. The trial, which started last week, got more complicated on Friday when the defense happened to be looking over exhibits and saw three text messages that would help their case that they didn’t recognize. While the attorney for plaintiff “Jane Doe” swears that the texts had been disclosed before the trial, TMZ and ABC News report that U.S. District Court Judge Michael W. Fitzgerald threatened him with a mistrial if he can’t prove it.

“This is not a trivial matter,” Fitzgerald said in court, addressing the plaintiff’s side. “You have been very careless with the exhibits. I was not happy about it.” He also referred to a potential non-disclosure as “unbelievably careless” several times. The judge also expressed concern that if he were to order a new trial, it would run into the NBA’s regular season (the current slate of games are all part of the pre-season). Seemingly aware of how that would look to the general public, Fitzgerald said that he would also take into account that a student defendant would potentially miss classes due to a trial conflicting with the semester.