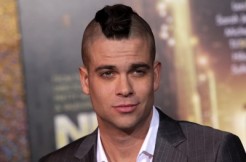 Mark Salling, an actor on the popular television show Glee, is expected to turn himself in to federal authorities, according to an Associated Press report. Authorities are scheduled to arraign him on two counts of receiving and possessing child pornography.

Los Angeles police and Homeland Security Investigations arrested him on December 29 after seizing his laptop, hard drive, and a USB flash drive, according to a Justice Department statement. Salling initially faced state charges, but investigators turned the case over to federal authorities after allegedly discovering thousands of illicit images in these items.

“Those who download and possess child pornography create a market that causes more children to be harmed,” United States Attorney Eileen M. Decker said after Salling’s indictment on May 27. “Young victims are harmed every time an image is generated, every time it is distributed, and every time it is viewed.”