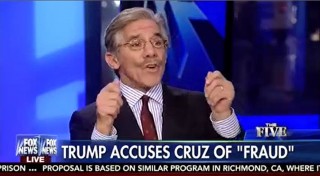 Geraldo Rivera is now saying that the Ted Cruz campaign may be guilty of a misdemeanor crime because of the ‘voter violation’ notice that they sent out earlier this week. Rivera, who is also an attorney, made the comment during an afternoon program on Fox News. Cruz sent the mailer out to lower turnout voters to try to get them to turn up for the Iowa caucuses.  The yellow violation notice said “VOTER VIOLATION” and “PUBLIC RECORD” in bold red letters.  Donald Trump has been sending out tweets all day accusing Cruz of  ‘total fraud’ and ‘stealing’ the caucuses.  Apparently, Rivera believes there may be some truth to his legal concerns.

“Lying about Ben Carson is a dirty trick, that is not a crime, that’s a dirty trick.  This is a crime, I believe a case can be made that the Cruz campaign is guilty of the misdemeanor falsely representing an official document,” Rivera said.

As we first reported earlier this week, by placing “PUBLIC RECORD” on top of the violation, the Cruz campaign delved into some murky legal water. Paul Pate, the Iowa Secretary of State (Republican by the way) is also concerned. His office fired back with this statement earlier this week.

Accusing citizens of Iowa of a “voting violation”  based on Iowa Caucus participation, or lack thereof , is a false representation of an official act. There is no such thing as an election violated related to frequency of voting. Any insinuation or statement to the contrary is wrong and I believe it is not in keeping in the spirit of the Iowa Caucuses.

According to Iowa code, a potential false representation is, in fact,  a violation of criminal law.  The law reads (Section 720.5) “any person who represents any document or paper to be any public record or any civil or criminal process, when the person knows such representation to be false, commits a simple misdemeanor.” (Side note: this is part of the Chapter of Iowa Law entitled Interference of Judicial Process).