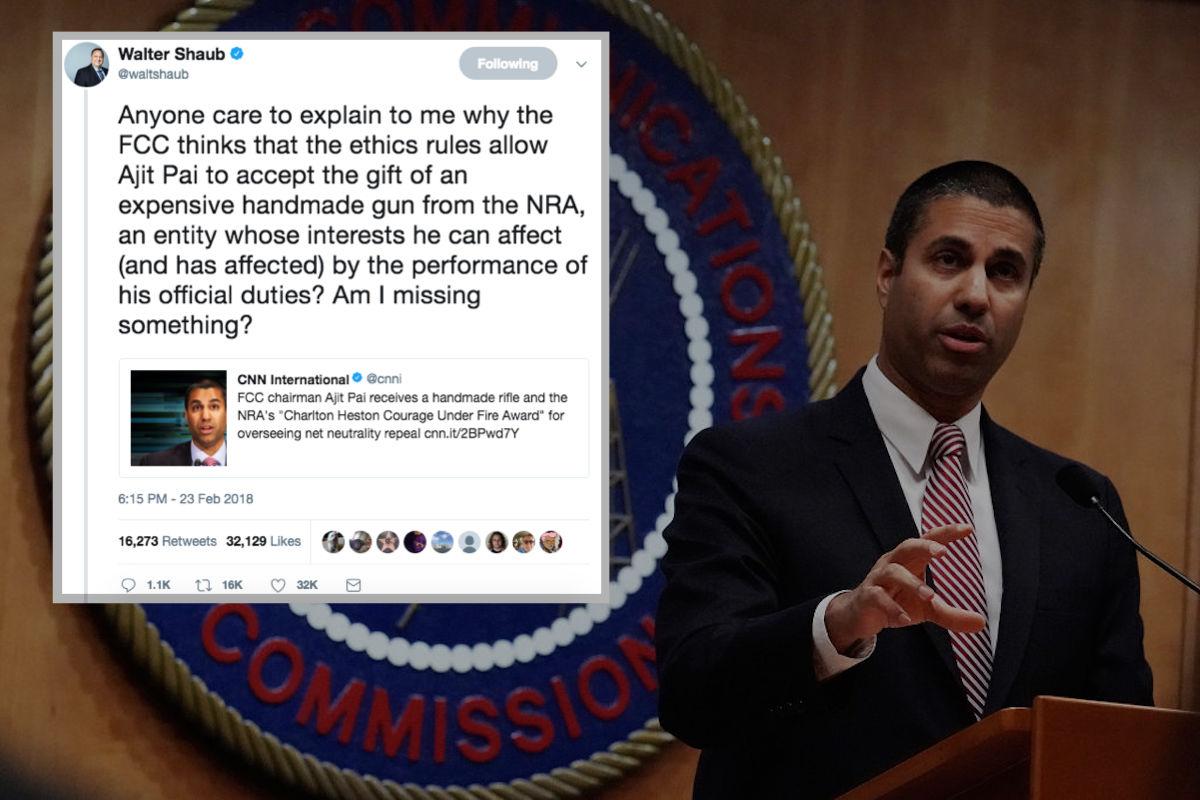 Media outlets noted the gifting of the handmade Kentucky long to Pai at the annual Conservative Political Action Committee Conference on Friday in National Harbor, Maryland.

Pai received the gun as part of the NRA’s Charlton Heston Courage Under Fire Award, which this year honored the FCC chair because he was roundly mocked and trolled online after controversially reversing Obama-era net neutrality rules.

I’m sure this gift is worth more than $200, so where is the FCC’s written analysis? You know, the one the regulation requires FCC to issue.

Appended to Shaub’s tweet was the partial text of a statute related to gifts received by federal officials.

Titled, “Exceptions to the prohibition for acceptance of certain gifts” and codified at 5 CFR 2635.204(d)(1)(ii), the language reads:

Apparently not receiving a response, Shaub pressed on in a later tweet, tagging Pai directly, and asking, “what did your ethics official tell you about that valuable handmade gun from the NRA? Please post the written decision under 5 C.F.R. 2635.204(d)(1)(ii) online so we can all see it. (Notice the tense, “has made,” means a decision is required *prior* to acceptance.)”

Pai never responded publicly to that tweet either. As of this writing, Shaub posted at least seven tweets referencing the alleged ethical lapse—increasingly accusing Pai of untoward behavior and mocking his failure to respond. Shaub’s two latest tweets—sent early on Saturday—are reproduced in full below:

Anyone care to explain to me why the FCC thinks that the ethics rules allow Ajit Pai to accept the gift of an expensive handmade gun from the NRA, an entity whose interests he can affect (and has affected) by the performance of his official duties? Am I missing something? https://t.co/S6ocyWIV7H

Still no response from @AjitPaiFCC. He’s been retweeting today but hasn’t offered an explanation for the NRA’s gift yesterday. Come on, Ajit. I’m sure you have your ethics officials’ phone numbers in your cell phone. Did you call either Tom J. or Jane H. before accepting it?