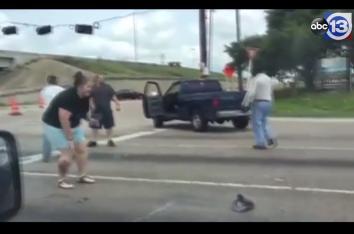 Authorities in Harris County, TX are investigating an apparent road rage incident on Saturday afternoon that was recorded by a passerby using her cellphone.  The video shows the incident escalate from a shouting match to an all out brawl.  Then, just when it appears to be over, one motorist appears to intentionally back his truck into the other motorist’s car before driving off.

David Dao told ABC 13 EyeWitness News that he was driving with his daughter when they pulled up to the intersection and saw four people outside arguing.  He told his daughter to start filming with her cellphone and what she captured is just amazing to watch.

(Warning: Some people may find the language and content disturbing)

The video begins and appears to show a man and woman standing outside their Dodge truck arguing with two men who were in white sedan.  All four return to their vehicles but the man in the truck appears to suddenly speed forward, leaving his female passenger still standing in the road.

The female then returns to the window of the white sedan and the argument continues.  As she walks away from the white car, someone inside that vehicle seems to throw what looks like a drink — maybe a water cup — at the woman.

Just after this happens, the male driver of the Dodge truck comes running back into view and appears to drop kick the front-end of the white sedan.

The driver and passenger from the white sedan then both get out and rush towards the man.  Both appear to be attempting to hit and kick him.  The woman starts screaming and frantically tries to intervene and stop the fight.  She appears to get it in the face at least twice in the process.

The fight then breaks up as at least one other motorist appears to have finally left his vehicle to help put a stop to the brawl.  The woman appears to doubles over, trying to regain her breath and the man she was with walks her back to their truck.

As this is going on, Dao can be heard in the background instructing his daughter to record the plate numbers of the vehicles.  Unfortunately, she is not a good angle and appears unable to do so.

As she is doing this, you suddenly hear the screeching of tires and the Dodge truck backs up, smashing into the white sedan and then takes off down the highway.

“I couldn’t believe it. As soon as he kicked the grille, I was like, ‘This is going down now,’” Dao told ABC 13. “I was thinking this is going to be bad. At that time, I knew because there’s physical damage now.”

ABC 13 tracked down and spoke to the driver of the white sedan on Sunday.  The man reportedly did not want to go on camera, but he did tell the reporter that the camera did not catch an earlier incident where he says the truck was speeding and almost hit him.  The man also said he did file a police report late on Saturday night, approximately eight to nine hours after the incident.

The Harris County Sheriff’s Office told the news station they are investigating the incident, but said they have not determined what charges will be filed.