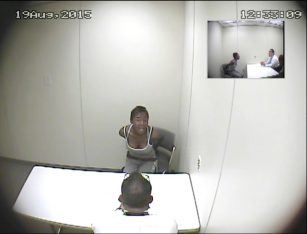 A teenage suspect accused of involvement in a brutal machete murder in Florida lashed out during her interrogation, screaming hysterically while trying to convince the police she was innocent of any crime.

“I did not kill that boy, I promise!” Desiray Strickland, the 19-year-old suspect, screamed at her interrogator.

The Miami Herald newspaper obtained video of the interrogation and posted it online on Wednesday morning.  According to the newspaper, Strickland is charged in connection with the murder of Jose Amaya Guardado, a 17-year-old who was found chopped up and buried in a shallow grave in Homestead, FL back in 2015.  Strickland’s boyfriend is the accused ringleader in the killing.

In addition to screaming at her police interrogator, Strickland also apparently put her hands on the detective and wrote a nasty message to police on the interrogation room table.

The interview was ended after Strickland invoked her right to retain a lawyer and she was returned to the lookup.

She remains in custody and is currently awaiting trial.