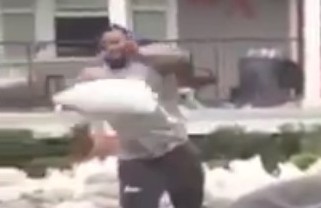 Frat boys from the Kappa Alpha Order in Tulane University put up a wall of sandbags in front of their off-campus house around April 7 in preparation for its yearly Old South formal ball, and a game of capture the flag, according to The Times-Picayune. They wrote Donald Trump’s campaign slogan “Make America Great Again” on the wall, but they probably didn’t expect it to be to taken it down without their permission.

In video obtained by The Tab, black students took down the wall while a white student tells them to stop. The black students are allegedly on the football team, The Daily Mail reports.

“This is private property, all right,” a student in a blue backpack tells one of the dismantlers on the video. Besides that, the video depicted no confrontation. One of the other frat boys tells the kid with the blue backpack to get inside the house.

The video has gotten a bit of a reaction. The dismantled wall outraged George Washington University Law Professor Jonathan Turley.

“The hypocritical position of these students reflects the growing intolerance for free speech on our campuses,” he wrote in a Friday blog post. “These students believe that they have a right, even an obligation, to silence students with opposing views.”

A recent Change.org petition by GENTE, a campus Latino group, said, “If the individuals who took the wall down are targeted or penalised [sic] in any way for their actions, we the undersigned organisations [sic] would also like to claim responsibility for this act.” The petition said the frat’s use of Trump’s slogan “has become overtly threatening towards Muslim and Latino students.”

Donald Trump garnered a lot of heat for his comments on Mexican immigrants and Muslims coming to America. He called the former “rapists” while announcing his run for the presidency, and said the latter should be prevented from coming into the U.S. “until our country’s representatives can figure out what is going on,” a campaign press release obtained by CNN said.

University spokesperson Mike Strecker told The Times-Picayune that the frat leadership told him they used the slogan as satire.

Trump is still the front-runner for the Republican nomination for president, with 743 delegates.

[screengrab via The Tab]
–