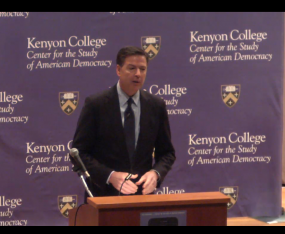 Some privacy advocates are accusing FBI Director James Comey of hypocrisy over remarks he made last week during a speech about privacy and encryption at Kenyon College in Gambier, Ohio.

According to NPR, the controversy stems from an offhand remark Comey made in response to an audience question about the how the increased public awareness of surveillance, encryption and privacy might ultimately impact the FBI’s ability to conduct investigations.

Comey told the audience he was hopeful the raised awareness would ultimately be a good thing and recommended that people channel their anxiety into a desire to learn more about the issues in order to both take appropriate precautions to protect their privacy and contribute to the debate surrounding the limits of government surveillance. Comey then gave the audience an example of something he started doing after learning more about the issues and that is what has privacy advocates up in arms.

After Comey’s statement, Christopher Soghoian, a man identified by NPR as a senior policy analyst with the ACLU, fired off a series of sarcastic tweets highlighting the perceived hypocrisy:

FBI Director Comey has created a “warrant-proof webcam” that will thwart lawful surveillance should he ever be investigated. Shame on him.

I spotted this warrant-proof anti lawful surveillance of webcam tech at Staples today. What if terrorists buy it? pic.twitter.com/ycaGgCoiDP

As privacy advocates see it, this was blatant hypocrisy on Comey’s part because earlier in the speech he had again advocated that technology companies should not create devices that are “unhackable” for purposes of a law enforcement investigation.  As NPR noted, “a taped-over webcam is about as unhackable as a device can get.”