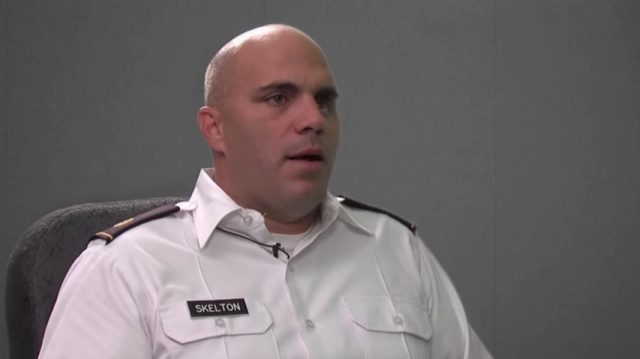 A wounded Army officer says the Department of Veterans Affairs (“VA”) won’t pay for a feeding tube liquid he needs in order to eat.

Army Major Dennis “DJ” Skelton penned an open letter to the VA published yesterday by Foreign Policy. Skelton’s letter humorously outlines the taxing series of events and bureaucratic mishaps that have left him more or less unable to eat solid food. He wrote:

On Saturday you had me go to the emergency room at my local hospital to place a feeding tube in my stomach because, with my shot-up palate deteriorating, it is getting dangerous again for me to eat or drink through the mouth.

After that surgery, however, the VA apparently failed to notify Skelton as to when his next shipments of liquid food would arrive. At the same time, the VA also persuaded him to switch brands from Jevity to Diabetisource–both feeding liquids for use with such tubes. And then this happened:

So [Monday], six days post-surgery, I received a letter from you informing me that the brand you recommended to me, Diabetisource, is actually not covered by the VA and I need to go find and pay for my own feeding tube liquid on my own.

Adding a touch of humor, Skelton writes, “I am fully aware of the fact that one can survive for two weeks without food, but come on!” He then notes that he was recently lent a turkey baster in order to be able to eat.

Skelton’s letter goes on to note that the VA has multiple problems and issues to work through–but openly pleads for his case not to become a “teaching moment” for every single one of them.

Wounded by an RPG in Iraq, which tore into his left arm and right leg, Skelton was also shot in his left cheek–which ripped his mouth apart and came out of his right eye socket. He now runs Paradox Sports, a nonprofit based out of Colorado which aims to help the disabled engage in recreational activity.

The open letter ends on a somewhat sardonic note:

Ironically I’m writing this on a train as I travel to West Point to help write a chapter on “resilience” for their new Psychology textbook. And now I’m giggling, which is extremely painful since I have a fresh hole in my stomach.