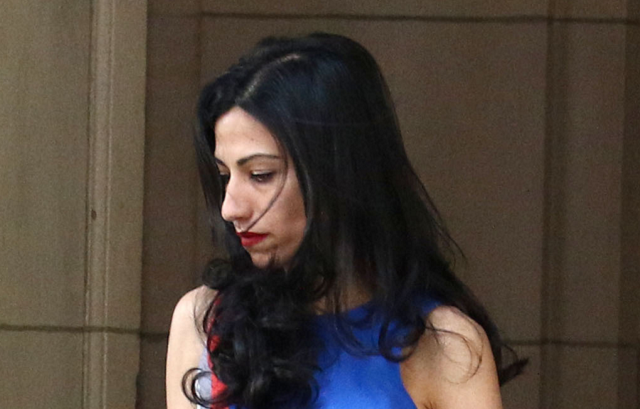 In case you’re still recovering from a few mimosas too many, welcome to 2018. It’s freezing here, and our president is still obsessing over all things Hillary Clinton, including Huma Abedin, Clinton’s longtime staffer. This morning, POTUS fired up his phone and tweeted a Huma-themed rant. Truly, if there were any justice in this world, Abedin would be allowed to fade into obscurity for at least the length of her soon-to-be-ex-husband Anthony Weiner’s 21-month prison sentence. Our president, though, true to form like a middle-school mean girl, is a yuge fan of villainizing political opponents. His suggestion? Let’s lock Huma up:

Putting aside the more obvious question – how on earth our president thinks it’s appropriate for him to demand criminal prosecutions of anyone over social media – let’s just take a look at the case he’s making against Abedin. Trump has demanded that Abedin be punished for the crime of putting “classified passwords into the hands of foreign agents,” in ostensibly the same way Petty Officer First Class Kristian Saucier was after he pleaded guilty to mishandling classified information.

In the months leading up to the 2016 election, the FBI investigated Hillary Clinton over the whole email debacle. Ultimately, the investigation resulted in a lot of nothing for Clinton in terms of criminal findings, but it certainly had a major impact on the November election. Then FBI-Director James Comey held that weird press conference in which he pronounced Clinton’s behavior to have constituted “extreme carelessness.” Much speculation ensued over whether Comey’s announcement helped or hurt Hillary Clinton as a presidential candidate – all of which proved moot when Comey delivered the final blow to the Clinton campaign. Just a few days prior to the election, Comey reopened the investigation and publicized that a whole bunch of sensitive (and some classified) emails of Huma Abedin’s had been found on her husband’s laptop.

In the end, Trump became president, Abedin filed for divorce against her sext-addicted husband, and Weiner checked into federal prison to serve almost two years. So why is Trump tweeting about Abedin now? The short answer is, “because the bulk of his world views are formed as a result of watching Fox & Friends.” Today, the Fox News morning show promoted a Daily Caller piece, and Trump’s response was practically Pavlovian.

Abedin, Weiner, and their laptops resurfaced in the news cycle this week when thousands of emails (those same emails that Comey had mentioned a few days before the election) were released as part of an ongoing lawsuit against the State Department brought by Conservative watchdog group Judicial Watch over various alleged security breaches by Clinton and her inner circle.

Look, I appreciate that Trump believes that everything on Fox & Friends is hard news, but this Abedin “story” is the epitome of yesterday’s news. The FBI looked into Clinton, Abedin, Weiner, their emails, their servers, their computers, etc. The FBI did find carelessness and wrongdoing; it did not find criminal misconduct. And sometimes, that’s just how it goes. Not every bad action is a crime. Not every mistake is grounds for prosecution. This week revealed exactly zero new information about Huma Abedin or security breaches.  Trump’s failure to accept the outcome of the FBI’s investigation is a colossal slap in the face of law enforcement at every echelon.

Moreover, Trump’s casual reference to “sailors [sic] picture on submarine,” underscores something truly problematic about the man at the helm of our executive branch: a fundamental lack of knowledge about how laws actually get enforced. Our commander in chief wouldn’t make it through an undergraduate criminal justice course, much less the juris doctor that most of his predecessors obtained; while there are plenty of non-lawyers thoroughly qualified to hold high office, Donald Trump is not one of them. With every communication, Trump clarifies an obvious tenet: that the enforcement of law against an individual is relative to the behavior of others. Within Trump’s logic, any hint of wrongdoing uncovered by Robert Mueller must be viewed through the lens of Hillary Clinton’s actions. The same principle applies to others as well: Huma Abedin should be jailed because Kristian Saucier was. The fact that Saucier pleaded guilty to a charge based on facts quite different from anything suggested of Abedin is, at least in Trump’s mind, irrelevant. Saucier’s guilty plea followed an indictment based on his having used a cell phone to take pictures of a classified engine room aboard a nuclear submarine, and subsequently destroying a laptop, memory card and camera after learning he was under investigation. Needless it say, it’s a little different than anything Huma Abedin’s using an unsecured Yahoo email account. Still, in Trump’s America, prosecutorial discretion isn’t based on the judgment of law enforcement professionals; it’s a sword to be wielded on a whim against opponents and rivals.

Well, at least he was gracious enough to wish them a good New Year:

As our Country rapidly grows stronger and smarter, I want to wish all of my friends, supporters, enemies, haters, and even the very dishonest Fake News Media, a Happy and Healthy New Year. 2018 will be a great year for America!