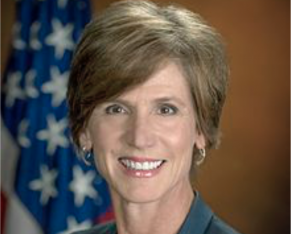 Former Acting Attorney General Sally Yates became a political lightening rod after her sudden resignation in protest of President Donald Trump‘s “extreme vetting” executive order.  She was almost uniformly praised by those on the political left for standing up to the Trump administration while at the same time almost universally denounced on the right for political grandstanding.  The fallout over Yates resignation has spilled over into at least one state legislature, Georgia, where a “privilege resolution” honoring her career in public service was referred to a state senate committee where it is likely to die without further action.

According to Atlanta Magazine, Democratic Georgia state senator Elena Parent cited Yates’ resume as a public servant and prosecutor  when she offered the resolution last week, and purposely left out the dust up surrounding her resignation.  Before rising to the Deputy Attorney General position under the Obama Administration, Yates served in the U.S. Attorney’s Office for the Northern District off Georgia where she presided over the prosecution of Olympic Park bomber Eric Rudolph.  Former President Obama appointed Yates as the U.S. Attorney for the Northern District of Georgia in 2010, where she served for 5 years before eventually becoming the Assistant Attorney General.  The resolution referred to how Yates’ “devoted her distinguished career toward the betterment of her state and country, as evidenced by her decades of putting service above partisanship.”

“Privilege resolutions” are a common practice in state legislatures across the country.  Lawmakers often submit such resolutions for a longtime teacher’s retirement, or after the death of a notable constituent.  As the article notes, these resolutions provide a way for a lawmaker to give a quick nod to an individual and generally pass without much discussion.

However, that is not what happened when the Yates resolution was introduced.

Republican Lt. Gov. Casey Cagle stepped in and referred the resolution to the state senate’s judiciary committee where it is expected that it will essentially die.

Cagle’s office has reportedly not provided an explanation for why the Lt. Governor stepped in to refer the resolution to committee, which has led some to assume he was motivated purely by partisanship.   You see, “privilege resolutions” are rarely referred to committee.

By the magazine’s count, last year the senate buried two resolutions that were meant to acknowledge a progressive think tank organization and another that attempted to recognize a radio host who was a former staffer to a Democratic lawmaker.  They had to go back to 2009 to find a similar occurrence involving a high profile individual when a Republican state representative blocked a resolution to the then-newly inaugurated Barrack Obama.

“Instead of passing, this resolution has been referred to committee presumably to bury it forever,” Sen. Parent said in a speech on the Senate floor. “I’m disappointed that this body is apparently choosing to play petty partisan politics with Ms. Yates’s distinguished legal career . . . especially when I very purposefully decided to not mention anything about that kerfuffle when offering this resolution so it was something we would all feel good about.”

Sen. Parent is not giving up, however, as she has now called for the judiciary committee to hold a hearing on the resolution.