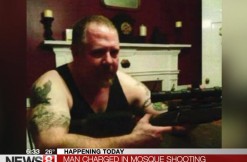 An ex-Marine will go to prison for shooting up a mosque. Ted Hakey Jr. pleaded guilty Thursday in federal court for the intentional destruction of a religious property with a dangerous weapon.

In what qualifies as a hate crime, Hakey Jr. fired rifle shots into the Baitul Aman Mosque early Nov. 14, very shortly after the Paris terror attacks that killed 130 people. No one was hurt in this Connecticut incident.

“Individuals who commit hateful, divisive and violent acts against others in violation of federal law will be prosecuted,” U.S. Attorney Deirdre Daly told NBC Connecticut about Hakey Jr. “All of us have a right to worship freely and without fear of violence.”

Part of the feds’ case against Hakey Jr. was based on social media comments he’d made. For example, he made a post right after the Paris attacks: “What is gonna be the breaking point to go ‘weapons free’ against Islam?”

“I want to take the jewzi and unload on Muslims,” he wrote in a July text cited by WTNH. “I’m in a target rich environment.”

But if he was communicative in the digital world, he was more reserved in person, and declined to talk much to NBC Connecticut. “Not allowed to speak at all yet, but after sentencing I’ll be open to talk to everybody,” Hakey Jr. said.

His sentencing hearing is scheduled for May 10. It’s possible he’ll serve as much as 14 months, or as little as eight. On top of that, he loses that rifle forever, and he has to pay $5,130 to the mosque.