To Stay Alive, Daily Fantasy Sports Needs to Get Behind Regulation 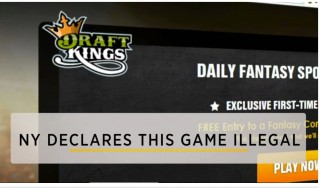 We’ve all seen the FanDuel commercials that have plagued us day in and day out.  We’ve seen the words “DraftKings” and “FanDuel” plastered on the walls of stadiums, denoting sponsorships with teams.  John Oliver even gave the most epic dialogue on daily fantasy sports sites. Alas, after months of legal fights between DraftKings, FanDuel, and New York State Attorney General Eric Schneiderman, a settlement has been reached that will end daily fantasy sports gaming in NY for now.  As LawNewz’s Chris White reported, this is pending the outcome of an appellate court decision to determine the legality of daily fantasy sports gaming.  This decision will not be heard until September.

In a press conference on Monday, AG Eric Schneiderman said that DraftKings and FanDuel “did the right thing” by ceasing and desisting business in New York.  “This is a decisive and important victory for the rule of law in New York State. No company or individual, no matter how powerful or well-financed, is above the law,” said Schneiderman.  Schneiderman further added that it is his job to enforce the law in New York.  The AG further added that this settlement has no effect on the consumer fraud and false advertising claims of these DFS websites.  FanDuel also responded on Monday, stating that they intend to stay headquartered in New York but believe that this settlement is in the best interest of the company and the daily fantasy sports gaming industry. DraftKings expressed a similar statement, asserting that they will work with the NY State legislature to enact law that will enable daily fantasy sports gaming to resume in New York.

There is no question that the DFS litigation has been one of the biggest legal headlines in the sports law world for the past 5 months.  Even though the settlement might seem like a loss for the daily fantasy sports gaming industry, it actually is a win because it helps create a clearer path towards regulating a huge industry.  DraftKings and FanDuel, among other daily fantasy sports gaming sites, made the assertion when they began operations that their business was able to operate as it was exempt as a form of gambling under the Unlawful Internet Gambling Enforcement Act.  These daily fantasy sports sites have even gone to the extent of exclaiming that their businesses do not promote gambling or fall under the definition of “gambling” as DFS gaming is a game of skill.  It’s become quite clear though, that many states agreed with AG Eric Schneiderman that DFS gaming is indeed gambling. In fact, in addition to NY, there are 8 other states that have banned DFS gaming.

With this settlement in place, it’s time for DraftKings, FanDuel, and other DFS sites to focus on one thing: creating legislation that will legalize daily fantasy sports gaming in New York.  Presently, there are multiple states working to create and enact legislation that will permit the practice of daily fantasy sports gaming.  This is the best measure that can be taken to keeping the DFS industry alive.  DFS businesses need to be held accountable for their practices and need to be regulated to ensure that there are no improper or illegal business practices being carried out.  DFS legislation also ensures the protection of potential consumer fraud, which has been one of AG Schneiderman’s main concerns throughout this entire ordeal. Not to mention that in the long run, creating law on this matter is far more cost-effective than fighting this out in a courtroom where the odds of winning seem less likely.  It is also very reassuring to see that state legislatures are very willing and open to creating law that will keep legalize DFS operations.

Justin Fielkow, a Chicago-based attorney and co-founder of “The Sports Esquires” blog, agrees that this settlement paves the way for legislation in New York. “Although even a short term shutdown in New York is far from ideal, as it represents one of the largest states in terms of revenue and users for daily fantasy sports operators, attention can now primarily be focused on passing legislation that expressly legalizes fantasy sports.”  He also told LawNewz that it’s not by sheer coincidence that these settlements happened during this season.  “For many daily fantasy sports operators, the spring and summer months are the slowest time of the year, but a return to operation in New York in time for the NFL season – whether via legislation or a favorable court ruling – remains a possibility.”

You can certainly call this a win for the NY AG’s office.  But it is just as much a win for Daily Fantasy Sports companies. It is an admission that litigation may not lead to a conclusory win.  It is equally an affirmation that instead of “going rogue” against the legal system, FanDuel, DraftKings, and other daily fantasy sports sites can work in concert with lawmakers to create legislation that will ensure the protection of consumers, create regulation in a fairly new industry, and most importantly, keep these businesses open.