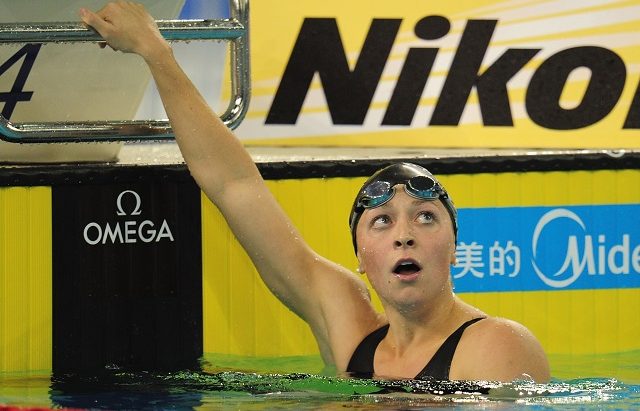 Former coach of the U.S. Olympic Swim Team, Sean Hutchison, is being investigated by federal authorities after a former swimmer told police that he took nude photos of her when she was a minor. Ariana Kukors told police that Hutchinson had coached her since she was 13, and took pictures of her when she was 17. She claims that Hutchinson used his position to “groom” her for sexual exploitation from a young age, according to SeattlePI.

The abuse allegedly began when Kukors was 16.

Officials from the Department of Homeland Security and other authorities are now investigating Hutchinson, and on Tuesday they recovered electronic devices from his Seattle apartment that they believe could contain evidence that he sexually exploited swimmers. So far, no charges have been filed.

“I never thought I would share my story because, in so many ways, just surviving was enough,” Kukors said in a statement. “I was able to leave a horrible monster and build a life I could have never imagined for myself.” She went on to say how she felt the need to speak out to possibly prevent future abuse:

But in time, I’ve realized that stories like my own are too important to go unwritten. Not for the sake of you knowing my story, but for the little girls and boys whose lives and future hangs in the grasp of a horribly powerful and manipulative person. That they may not have to go through the same pain, trauma, horror, and abuse. That their parents, mentors, and guardians are better able to spot the signs of grooming and realize it’s tragic consequences before it’s too late.

Kukors competed at the 2012 Olympics and retired the following year.

This story comes on the heels of a massive sex abuse scandal in the USA Gymnastics world. Former team doctor Larry Nassar was sentenced to more in three separate cases, with one case bringing up to 175 years in prison, after he pleaded guilty to abusing women and girls in his care during medical treatments. Nassar was also convicted in a federal child pornography case. Investigations are ongoing to determine what role others may have had in enabling him.

“Much like the USOC knew about Larry Nassar years before his arrest and did nothing, USA Swimming had notice in 2010 that Sean Hutchison was involved in an inappropriate coach-athlete relationship with Ariana and took no actions to protect her or other swimmers from this pedophile,” Allard said. “If this organization had immediately reported what it knew to authorities, Hutchison likely would have been stopped, Ariana would have been spared years of abuse, and countless other young girls would have been protected from this sexual predator.”