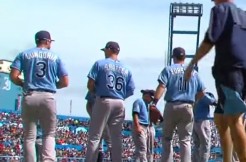 A fan hated the Tampa Bay Rays’ trip to Cuba, so he jumped onto the field at a Saturday spring training game against the Pittsburgh Pirates, and tossed a beer can into their dugout, police in Bradenton, Florida said.

The man reportedly jumped a short fence at McKechnie Field, cursed out the Castro regime, and threw the can, police reported.

The beer-thrower was restrained by Rays third-base coach Charlie Montoyo and a member of the Pirates’ grounds crew until police arrested him.

“I realized he speaks Spanish, so I was telling him to relax,” Montoyo said. “I didn’t hear what he was yelling. He looked old, so I kind of felt bad for him. I was holding him and not trying to tackle him.”

The man was charged with assault, trespassing, and causing a fray.

The Rays faced off against the Cuban national team in Havana in a Tuesday exhibition game attended by President Barack Obama and Cuban President Raul Castro. This was the first time a sitting U.S. head-of-state visited the nation since Calvin Coolidge in 1928. The diplomatic relationship between the countries got nasty because of the Cold War, and have only since improved.

Press coverage of the visit has mostly been positive, but there’s been some criticism. It’s clear the beer-thrower is not a fan of Cuba’s continued reputation as a bad place for civil rights. 50 protesters were arrested by authorities there Sunday, shortly before President Obama arrived for his visit. They were part of the group, Damas de Blanco (Ladies in White), demanding the government shape up its behavior.

“For us, it’s very important that we do this so President Obama knows that there are women here fighting for the liberty of political prisoners,” co-founder Berta Soler told USA Today before being arrested. “And he needs to know that we are here being repressed simply for exercising our right to express ourselves and manifest in a non-violent way.”

[pic of the Rays from their Cuba trip via ABC screengrab]
–