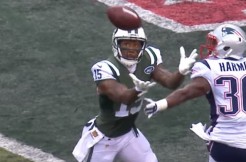 It has been alleged that NFL wide receiver Brandon Marshall punched a woman outside a Manhattan nightclub in 2012, but a civil trial jury doubted that on Friday. After deliberating for under two hours, the jury said the plaintiff didn’t prove it actually happened.

“He knew he never touched her and he wasn’t going to pay a penny because he knows he did nothing wrong,” his attorney, Harvey Steinberg, told reporters after the verdict.

The plaintiff, Christin Myles, testified that she sustained a cut eyelid, a black eye, as well as neck and back pain due to the alleged attack. She had been seeking damages in her lawsuit.

Also speaking about the 2012 incident, Marshall testified Thursday his wife was hit by a thrown bottle inside the club, cutting her mouth and knocking out several teeth. He alleged that Myers and some guys rushed him and some other people while they were waiting outside for an ambulance. He said he feared for his life.

No criminal charges were ever filed against him.

A male juror—who talked to the Associated Press, but didn’t identify himself—said the surveillance footage didn’t prove anything.

Marshall is a top player for the New York Jets. Last season, he set a team record for most receiving yards in a season.