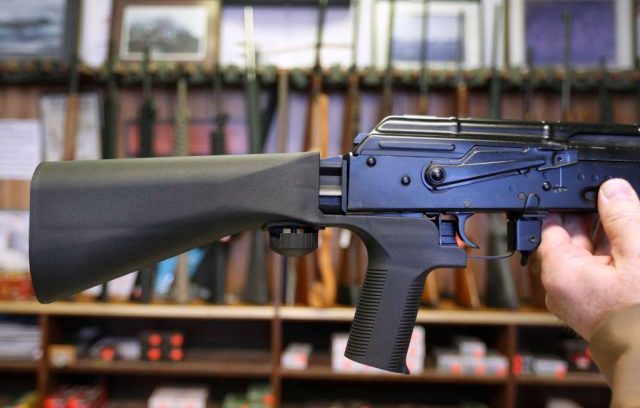 Denver became one of the first U.S. cities to outlaw bump stocks back in January, but since then none have been surrendered.

The device, which increases the firing rate of a semi-automatic weapon to mimic a fully automatic one, has faced widespread scrutiny since it was used last October in the Las Vegas mass shooting.

Many have called for restrictions or bans on bump stocks, including President Donald Trump.

On January 22, the Denver City Council passed legislation banning the possession and sale of bump stocks with only one “no” vote. A month later, the police department “suggested” that residents turn over their bump stocks, Denverite reported.

The city’s ban was called “largely symbolic,” however, since Denver already banned the semi-automatic weapons that bump stocks may be used with.

Several states have implemented similar bans, including Massachusetts and New Jersey. In Massachusetts, where those found guilty of breaking the new law could face 18 months to life in prison, state police reportedly received only three bump stocks and one trigger crank.

The low numbers may be because of the price tag, Essex Police Chief Silva explained during an interview with WBZ. According to him, the one man that surrendered his bump stock in Essex “was a little frustrated because of the fact that he’d paid a little over $250 on this piece here, and there was no redeeming value for him on the other side to recover that money.”

In New Jersey, lawmakers proposed legislation that would require the state’s attorney general to establish an anonymous buy-back program for bump stocks. There, a similar program held last August led to more than 4,000 guns being turned over to the state for cash in just two days.

Donald Trump said in late February that he would “write out” bump stocks himself.