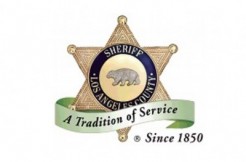 “I took my Biology exam last Friday,” stated one email obtained by The Los Angeles Times. “I was asked to name two things commonly found in cells. Apparently ‘Blacks’ and ‘Mexicans’ were NOT the correct answers.”

The emails were sent in 2012 and 2013, when Angel was the Deputy Chief for The Burbank Police Department. He had been hired to help reform the department, which faced many misconduct allegations, including brutality and racial bias. Angel jumped to The Los Angeles Sheriff’s Department in June 2015.

“Years ago it was suggested that an apple a day kept the doctor away,” one email he forwarded went. “But since all the doctors are now Muslim, I’ve found that bacon sandwich works best.”

Another crack went: “Japanese scientists have recently created a camera with such a fantastic shutter speed that it is now possible to take a photograph of a woman with her mouth closed.”

Angel told The Times he didn’t mean to cause any harm.

“Anybody in the workplace unfortunately forwards emails from time to time that they probably shouldn’t have forwarded,” he said. “I apologize if I offended anybody, but the intent was not for the public to have seen these jokes.”

When asked about the “biology exam” email, he told The Times that he was Mexican.

The Times learned about the emails after an LA lawyer’s records requests were fulfilled in 2014.

On Monday, McDonnell and Angel met with Salam Al-Mayarati, president of the Muslim Public Affairs Council. In the meeting, Al-Mayarati openly worried about sheriff’s officials unfairly targeting Muslims, and said Angel should be disciplined.

McDonnell told The Times he had no short-term plans to discipline Angel, though he called the emails “divisive and nonproductive.”

A Sheriff’s Department spokesman told The Times that Angel is an at-will employee, pretty much vulnerable to demotion and termination.