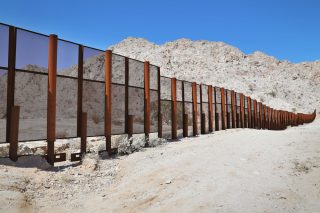 In the weeks since President Trump’s executive order banning immigration from seven predominantly Muslim countries, American attitudes about the foreign-born have been irrevocably altered. Through the prism of a Trump presidency, it becomes clear that who we are as a nation is defined in large part by how we treat others. Since POTUS 45 has ridden into town in his gilded limousine, more Americans than ever are comfortable conflating “refugees” with “illegal” or “undocumented” immigrants. Still more fail to draw any distinction between immigrants who lack a legal basis for being here, and those who simply arrived recently. And if that heart-rending and controversial SuperBowl commercial is any indication, who America is at its border is the identity that matters most of all.

Today, SCOTUS (still only 8 members, for those keeping score) will hear oral arguments in Hernández v. Mesa. The case is a civil lawsuit filed by the parents of Sergio Hernández Gueraca—a fifteen-year old boy who was fatally shot by a U.S. Border Patrol guard. Sergio had been playing at the U.S.-Mexico border in a dried-up portion of the Rio Grande, and playing a playing a game in which friends dared each other to touch the U.S. fence and run back toward Mexico. Officer Jesus Mesa, Jr. fired a fatal shot from the American side, and Sergio died sixty feet away, in Mexico. Sergio wasn’t an illegal immigrant or a refugee—he was a Mexican child who lived in Mexico and expected to return to his family in Mexico that evening after playing with his friends.

The Hernández’s federal lawsuit alleges that Officer Mesa violated the Constitution by using excessive force. The underlying facts look unquestionably bad for Officer Mesa; there’s little disagreement that he did use excessive force, but there is a pressing preliminary question for the courts to answer first:

Does the Constitution even apply?

It might be tempting to think that because Sergio Hernández Gueraca was not an American citizen, and was in Mexico when he was killed, that the Constitution is irrelevant to him. But in this scenario, it’s not just Sergio who matters. Officer Mesa was an American Border Patrol employee, and he was standing on American soil when he fired the fatal shot. If he broke the law, he did so as an American and in America. Whether a Mexican family can sue over that broken law is critically (although not simply) related.

U.S. Border shootings are horrifyingly common—and not just against people who are attempting to sneak into America. Victims like Sergio, sadly, aren’t anomalies. There have been so many that there is a split at the circuit-court level over the issue of how to handle these cases.

Sergio Hernández’ parents brought their case in the Fifth Circuit, because that was their only remaining option (Mexico charged Officer Mesa with murder – but the United States refused to extradite him). At the lower level, the Hernández family lost the case after a “formalist” approach was applied. The Fifth Circuit dismissed, ruling that the only people who are granted Constitutional rights are those who have a “significant voluntary connection” to the U.S. Sergio, who had just been playing near the border, had no such “significant voluntary connection.”

The Ninth Circuit, though, has a bit of a different perspective. It indicated last year that it would rely on a “functionalist” approach when presiding over a border shooting. The functionalist approach (developed in the 2008 Boumediene v. Bush which examined the rights of Guantanamo Bay detainees) held that Constitutional rights cannot be turned on and off like a light switch whenever it suits the government.

“The Nation’s basic charter cannot be contracted away like this. The Constitution grants Congress and the President the power to acquire, dispose of, and govern territory, not the power to decide when and where its terms apply. To hold that the political branches may switch the Constitution on or off at will would lead to a regime in which they, not this Court, say ‘‘what the law is.”

It’s worth noting that although there will be no Justice Gorsuch presiding over the Hernández case next week, his inevitable appointment to SCOTUS would likely mean that Justice Kennedy’s vote is the deciding factor in lots of split cases.

When this case was being considered for certiorari, the Obama Administration filed a brief urging SCOTUS to deny review, arguing that civil lawsuits are just not the right remedy for cases of border shootings. In its brief, the government made some compelling points, not the least of which was that extending the protections of the Fourth Amendment to a foreign citizen in a foreign land could become an absolute mess for the American government.

But the Supreme Court was more impressed with the Mexico’s brief on behalf of the slain boy, which argued:

“If left standing, the Fifth Circuit’s decision will create a unique no-man’s land—a law-free zone in which U.S. agents can kill innocent civilians with impunity.”

Even the fiercest advocates for border security have trouble logically justifying a position in which Border Patrol should be held accountable for the killing of an American child, but not a Mexican one. When SCOTUS hears oral args on February 21, questions from the bench will likely be our best indicator for which approach will become the law of the land.  And although the Hernández case itself deals with a border shooting, there is no guarantee that SCOTUS’ ruling about the scope of Constitutional rights will be limited to children playing games at near the Rio Grande.