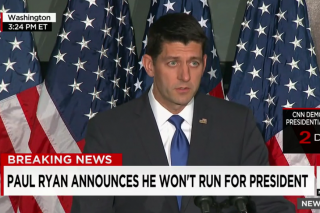 In an address Tuesday afternoon, Speaker of the House Paul Ryan announced that he has no intention of running for President, should there be an open convention.

“I do not want, nor will I accept, the nomination for our party,” Ryan said. He said he believes that should delegates become unbound after the first ballot of the convention, they should only vote for someone who is running.

Not only is Ryan against running for President, he doesn’t think he should even be allowed to run in the first place. While acknowledging that delegates on the Rules Committee make these decisions, he said, “I would encourage those delegates to put in place a rule that says you can only nominate someone who actually ran for the job.”

When asked how this is different from when he said he didn’t want to be Speaker and then took the job, Ryan said it was “apples and oranges,” because he was already in Congress at the time, and he is not even running for President.