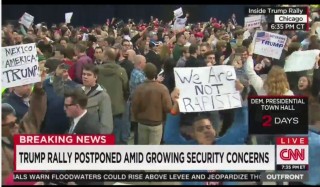 Following the raucous protests that broke out Friday night in Chicago, Donald Trump, who was forced to cancel his rally, has now apparently become a huge advocate of the First Amendment “It’s a little bit sad when you can’t have a rally in a major city in this country.. whatever happened to freedom of speech? Whatever happened to the right to get together?” Trump said to MSNBC in a phone interview.

Trump repeated his concerns to anchor Don Lemon on CNN Friday evening: “Even though our freedom of speech is violated, I didn’t want to see anyone get hurt.”

Trump’s rationale is the following:  since the protests broke out, he was forced to cancel his speech, his supporters couldn’t gather therefore his (and his supporter’s) rights were violated. That maybe true.  Sure, the protesters prevented Trump from  giving his speech and, certainly, violence is never a good way to advocate your message. However, for Trump to complain– his free speech rights are now being violated — is a bit ironic to say the least. Over the last several weeks, it has been Mr. Trump dealing blow after blow to the First Amendment.  Here are some prime examples:

So there you have it, Donald Trump appears to have a love/hate relationship with the First Amendment. This weekend, the two appear to be on speaking terms (so to speak).