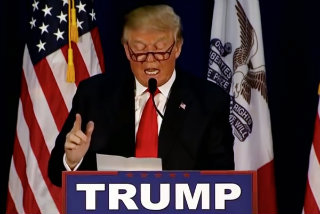 It looks like President Elect Donald Trump just can’t win with his new Washington, DC hotel at the site of the city’s “old post office” pavilion. The official Medium blog of the House Oversight Committee’s Democrats noted Wednesday that Trump’s lease with the General Services Administration contains a provision that puts him in violation of the agreement as soon as he takes office. This comes just a few weeks after LawNewz explained how the hotel could raise impeachment concerns.

The relevant portion of the lease says that “No member or delegate to Congress, or elected official of the Government of the United States … shall be admitted to any share or part of this Lease, or to any benefit that may arise therefrom.” GSA spokeswoman Renee Kelly addressed the situation in a statement to NBC News:

GSA plans to coordinate with the President-elect’s team to address any issues that may be related to the Old Post Office building. GSA ran a fair and open competition, subject to careful and rigorous review, which resulted in the selection of the Trump Organization as the preferred private sector entity to redevelop the Old Post Office. GSA negotiated a lease with the Trump Organization and submitted the details to Congress prior to signing the lease in August 2013.

The GSA issued another statement later on Wednesday:

GSA does not have a position that the lease provision requires the President-elect to divest of his financial interests. We can make no definitive statement at this time about what would constitute a breach of the agreement, and to do so now would be premature. In fact, no determination regarding the Old Post Office can be completed until the full circumstances surrounding the President-elect’s business arrangements have been finalized and he has assumed office. GSA is committed to responsibly administering all of the leases to which it is a party.

The Oversight Democrats aren’t exactly happy with what they’re hearing from the GSA, though. In a new letter to the organization, sent after the agency briefed the lawmakers, they express concern not just with Trump’s apparent breach of the lease, but also his daughter and a member of his transition team, Ivanka Trump, being the point person in the deal. In the letter, it’s also noted that “the Deputy Commissioner informed our staffs that GSA has received no communications to date from Mr. Trump’s business organization about this issue.” They feel that “[t]his raises serious questions about how Mr. Trump plans to proceed.”

“That’s extraordinary,” George Washington University law professor Steven Schooner told LawNewz when asked about the lack of communication. “Whether unbridled arrogance or basic incompetence, it’s quite simply unacceptable. Remember, this lease was signed in 2013, and Trump announced his candidacy more than a year before the election. That can only mean that the Trump organization has never seriously considered appropriate risk mitigation strategies and solutions in the $180 million dollar, high profile, long term agreement with the U.S Government. That’s a devastating indictment.”

Trump had addressed the issue of potential conflicts in a general sense in a series of Tweets on Monday, when he announced that his two oldest sons would be running his businesses. Ivanka’s name conspicuous by its absence:

Even though I am not mandated by law to do so, I will be leaving my busineses before January 20th so that I can focus full time on the……

Presidency. Two of my children, Don and Eric, plus executives, will manage them. No new deals will be done during my term(s) in office.

I will hold a press conference in the near future to discuss the business, Cabinet picks and all other topics of interest. Busy times!

The press conference mentioned in the final tweet was originally scheduled for Tuesday before being cancelled.

So, what’s next? Schooner says that “The clock will count down to January 20, and, at that point, GSA will (as it should) terminate the contract.” He figures that, “as is his practice,” Trump will likely file a lawsuit, but the independent Civilian Board of Contract Appeals (CBCA) would inevitably rule against him. “Sure, Trump can then appeal to the US Court of Appeals for the Federal Circuit, but, again, that shouldn’t change the result.”

Schooner has been unable to find any precedent that would allow Trump to prevail if this were to to court.

Editor’s Note: This article was updated at 3:30 p.m. ET to add the GSA’s second statement, explaining that they are not taking a position at this time as to whether or not Trump’s inauguration will void the hotel lease.