A mayor in a metro Atlanta town may be in hot water after posting a controversial message on Facebook for Election Day. Mansfield, Georgia Mayor Jefferson Riley put up this message on his personal Facebook page on Tuesday morning: 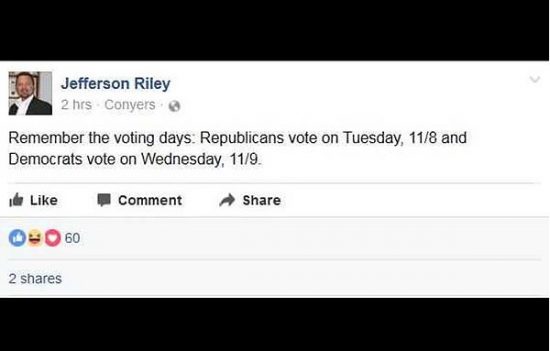 Riley deleted the post after he received a great deal of backlash online.  In an interview with the Atlanta Journal-Constitution newspaper, Riley told the reporter the post was a joke and he never intended any harm.

“People take things so seriously,” Riley told the newspaper. “You can’t joke about anything anymore — especially on social media.”

However, at least one Democratic group is not treating the posts as a laughing matter.

The Democratic Coalition Against Trump filed a formal complaint over the post with the Department of Justice on Tuesday, accusing the mayor of violating the Voting Rights Act.

While Mayor Riley seems to think his actions were a joke, it is clear that they were not,” Scott Dworkin, Senior Director of the Coalition, said in a statement obtained by LawNewz.com. “Attempting to prevent voters from voting by tricking them goes against the Voting Rights Act, plain and simple.”